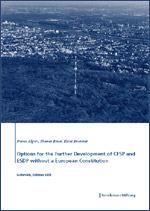 The Venusberg Group is a highlevel group of security and defense experts from across Europe brought together by the Bertelsmann Stiftung in early 1999. Since then meetings have frequently been held to examine the future of EU foreign, security and defense policy. Two Venusberg Reports have been released thus far: "Enhancing the European Union as an International Security Actor. A Strategy for Action" (2000) and "A European Defense Strategy" (2004). The Venusberg Group now prepares a third report which will put forward a European foreign policy strategy.