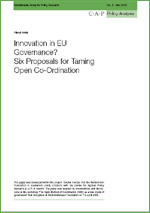 
Open methods of co-ordination (OMCs) have their origins in European Economic and Employment Policy. Within the framework of the Lisbon Strategy, these mechanisms have developed into a kind of panacea, since a high degree of openness has made them an easily accessible instrument of EU policymaking. Five years down the road, however, open co-ordination is still too 'open' to be a manageable policymaking tool. The hesitation of EU member states towards open co-ordination results primarily from the concepts linguistic and conceptual vagueness. Thus, the most important challenge confronting open co-ordination involves the establishment of a common understanding of the concept as such.