Youth and Politics in Serbia and Bavaria

Delegation of the Serbian National Assembly at C·A·P


How to inform young people about politics and how to create motivation for their further involvement? These questions have been the main focus during the visit of a high-rank delegation of the National Assembly of the Republic of Serbia at C·A·P on August 12-13. After a warm welcome by Prof. Werner Weidenfeld, the group went to the Bavarian State Chancellery in order to discuss with Mr. Michael Hinterdobler and Ms. Doris Schneider the question as to how political institutions can gain trust by their citizens and should communicate in a modern way with young people. In addition, the core role of an adequate media strategy that would guarantee sufficient transparency for the citizens without however taking the upper hand over the actual policy-making process have also been discussed. 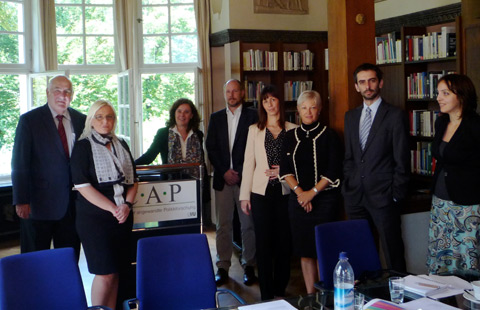 At C·A·P Eva Feldmann-Wojtachnia (Research group Youth and Europe) gave a short briefing on the EU's Youth Policy as a relevant framework within the field of dialogue models between Politicians and the young generation. In that context, she presented the approach of the EU, the Structured Dialogue, as well as best practice models for European education such as simulations, the Youth in Parliament model 'Europe Dialogue' and the Children's Parliament at the Bavarian State Parliament. On the background of Serbia's EU accession negotiations, the further deepening of the cooperation between the Serbian Parliament, the OSCE Mission to Serbia and the CAP is also planned in this area.

The visit of the delegation reaches back till 2006, when the Research Group Youth and Europe at C·A·P established its first contacts with the OSCE Mission to Serbia with the goal to strengthen the trust of Serbia´s young generation in democratic institutions. A Youth Parliament with 130 participants was initiated in Novi Sad in May 2007, which led to the adaptation of the methodical and didactic approach of the Research Group Youth and Europe according to the needs and conditions of the National Assembly of the Republic of Serbia. The Serbian version of the simulation of the  Bavarian State Parliament was then launched in November 2008.