From InsidePolitics to Globalization and its Discontent

An American Perspective on the future of National Identity and Global Governance.

On March 6th 2006, the Center for Applied Policy Research (C∙A∙P) and the U.S. Consulate General in Munich invited to a roundtable-discussion with the American political scientist and media analyst Darrell West. The Professor of Political Science and Public Policy at Brown University focused on the rising scepticism of the American public towards globalization and the chances for the Democrats in the upcoming midterm elections. 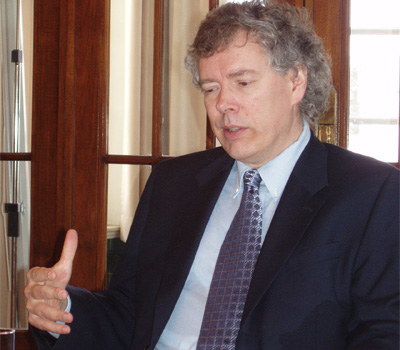 Prof. West stated that globalization and the rising trade deficit of the US with India and especially China have led to a swing of opinion within the American public. On the one hand poorer countries suffer from globalization mainly due to its negative impact on environmental and workplace conditions as well as human and social rights. On the other hand more and more jobs in the American economy move to Asia because labor is much cheaper there. This results in a rather unusual anti-globalization coalition of human and social right movements with environmentalists and trade union, as well as conservative groups who are afraid of job losses. Even from the perspective of the United States, who is obviously reaping the benefits of globalization, it seems difficult to harmonize the challenges - about 72% of U.S. citizens do not advocate globalization. Prof. West stressed that this mood has been reflected in the outcome of the World Trade Organisations ministerial conference in Hong Kong in December 2005. The aim of the Doha Development Agenda is to call attention to the fact that the results of the Uruguay Round were insufficient for developing countries and therefore improved trade opportunities for developing countries have to be provided. But at the same time rich countries face job losses to the newly industrializing countries.

Looking at the 2006 mid-term elections in the U.S., West projected the loss of at least one of the two houses in Congress for the Republicans, resulting from rising scepticism towards the economic policy of the Bush-Administration and the ongoing quagmire in Iraq. Voter outrage over corruption scandals and criticism of the handling of the hurricane Katrina disaster may also work in favor of the Democrats.

Additional issues in the roundtable-discussion were Irans nuclear program, the failure of the free trade talks with South America and the role of the European Union for the United States in changing international relations. Participants agreed that despite the various disputes of the past the European Union is still the most important partner for the United States, especially in the areas of security and economy policy.