Germany and China: Embracing a Different Kind of Partnership? 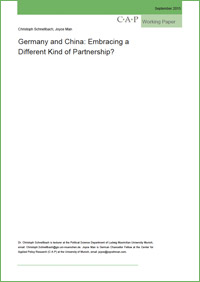 
This article explores the multifaceted relationship between Germany and China since the beginning of Gerhard Schröder’s "Change through Trade" policy in 1998. The authors argue that German policy towards China has been dominated by economic interests throughout all governments despite a short backlash in bilateral relations at the beginning of Angela Merkel’s term in office. In recent years, there have been efforts to extend cooperation to other fields like security and environmental issues. Both Germany and China increasingly consider a strategic partnership within mutual interest. However, the conflict in Ukraine serves as a litmus test which could reveal major differences to key aspects of international relations, such as sovereignty, democratic self-determination and multilateralism.