The Military Option in the Iranian Nuclear Crisis 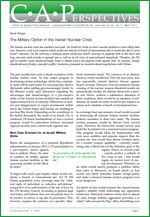 
The Iranian nuclear crisis has reached a new peak. An Israeli air strike on Irans nuclear facilities is more likely than ever. However, such a pre-emptive attack would not only be in breach of international law it would also fail to serve Israels interests. On the contrary, a military attack would put Israels security in jeopardy both in the short and long run and could provoke a regional war as well as an oil crisis of unprecedented magnitude. Therefore, the EU and its member states should persuade Israel to refrain from a pre-emptive strike against Iran. In contrast, Europe should advocate firmly a peaceful conflict resolution grounded on incentive-based negotiations with Tehran.