The Arab World in Transition: Prospects and Challenges for a Revitalized Relationship between Europe and North Africa 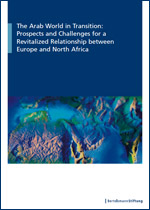 
After decades of authoritarian rule increasingly self-confident citizens in North Africa and the Middle East are asking to be given political, social and economic participation rights, responsible governance and the rule of law.

This civil society revolt against established government structures has differed significantly from country to country. New political systems are in the making in Tunisia and Egypt. Far-reaching political reforms have been announced in Morocco, Jordan and Oman. In Libya, Syria, Bahrain and Yemen the rulers have resorted to the use of force in an attempt to suppress the protests.

The European Union and its citizens and member states should lend their support to popular demands for political and economic participation and justice which are being voiced in their southern neighbourhood. This is not only a moral obligation. It is also in Europes best interests. Detailed country-specific strategies are now required.

The EU must make it clear to governments which have elected to use repression that their blatant disregard of the political will of the people will have consequences and that their leaders will no longer be seen as legitimate political partners of the EU. The EU should attempt to enlist the support of the international community for its views. At the same time this standpoint should not prevent the Europeans from providing for the humanitarian needs of refugees and victims of armed conflict.

However, in keeping with the notion of positive conditionality and its more for more principle, Europe should concentrate on cooperating primarily with the new democracies in Tunisia and Egypt and the governments which have not only announced meaningful reforms, but are actually implementing them.

The societies concerned will have to bear the brunt of the political transformation processes themselves, and each country will choose its own particular path. Against this background, European assistance should be construed as something that will help the EUs southern neighbours to help themselves.

Tunisia and Egypt need robust support in order to consolidate their new political systems, institutions, political parties and other organisations. Furthermore, they need economic assistance, for the uprisings have disrupted important segments of their economies such as the tourism sector.

The EU should encourage governments which are willing to introduce reforms, and lend support to their attempts to translate their promises into concrete political changes that are in line with what people actually want. In particular there is a need for a more effective separation of powers, intensive efforts to counter corruption and greater respect for civil rights and the freedom of the press. The time of cosmetic reforms is gone for good.

The demands being made by the protest movements transcend purely political matters and include economic and social issues. The lack of employment opportunities and the absence of an economic perspective are a major source of potential conflict and pose a serious risk to all of the countries in North Africa. In order to meet this challenge Europe and North Africa should define a vision of sustainable development which will make it possible to pursue common interests and to develop the regions existing potential. Projects that can help to create permanent employment opportunities in the region and improve its ability to generate wealth are of particular importance in this context.

Thus the EU would have an immediate impact if it granted the countries in North Africa unrestricted access for their agricultural products to the internal European market. The adoption of better agricultural methods and a more effective use of water and arable land are other areas in which cooperation could flourish. Moreover, the Europeans should also promote the process of diversification in the North African economies by helping to develop a local capital goods industry.

Enhancing mobility should be another element in the cooperation. The introduction of jointly managed circular migration programmes for students, businessmen and skilled workers would be a particularly promising endeavour. Such migration schemes would also be one way of dealing with the demographic challenges to the north and to the south of the Mediterranean, and could build bridges between societies and cultures. Furthermore, they could have a long-term effect on the labour markets in North Africa, especially if the migrants, when they return to their countries of origin, are encouraged to develop their business ideas and thus to create employment opportunities and prosperity.

The area of renewable energy sources would seem to offer an especially attractive perspective. The Mediterranean Solar Plan and the Desertec private sector project are blueprints for cooperation in the generation of power from alternative sources. Projects such as these have the potential to help people in Europe and North Africa to improve their long-term energy security. And they could help to create urgently needed employment opportunities in North Africa and to strengthen regional cooperation.