Why Serbia should be granted candidate status for the European Union

Sebastian Schäffer:
Why Serbia should be granted candidate status for the European Union
C·A·Perspectives · 4 · 2011
Pdf download 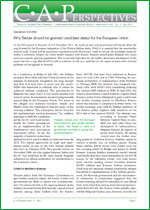 
At the EU summit in Brussels on 8-9 December 2011, the heads of state and government will decide about the way forward for the European integration of the Western Balkan states. While it is expected that the membership contract with Croatia will be signed and negotiations with Montenegro could be opened, the candidate status for Serbia is uncertain. Despite the recent border disputes with Kosovo, Brussels should grant Belgrade this status and even consider opening negotiations. This is not only important for the further democratic development in the region but also a sign that the EU is able to continue its role as a stabiliser for the region in times when internal problems set the agenda in Brussels.

Southern and Eastern Neighborhood
Conference by the Academy of Political Education Tutzing and the Institute for the Danube Region and Central Europe
09.10.2017 · C·A·P