Europe and the Arab World: Towards a Principled Partnership 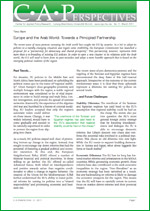 
The recent wave of mass protests sweeping the Arab world has caught the EU by surprise. In a bid to adapt its policies to a rapidly changing situation and regain some credibility, the European Commission has launched a proposal for a partnership for democracy and shared prosperity. This partnership, however, represents little more than a re-branding of existing EU policies. In order to open a new chapter in its relations with the Arab world, the EU will need to learn from its past mistakes and adopt a more humble approach that is based on the emerging political realities of the region.