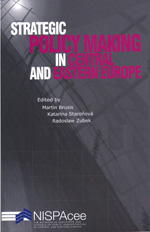 
Strategic policymaking is about governments achieving at least three types of goals. Policies should bring collective rather than sectoral benefits. Governmental action should be informed by a longer-term perspective going beyond immediate re-election concerns. And policies should rely on an in-depth analysis of causal relations and a careful consideration of all available policy options.

Originating from the 'Network of Institutes and Schools of Public Administration in Central and Eastern Europe', the book assesses the relationship between specific core executive institutions and policy performance. Its individual chapters study the following themes and countries: