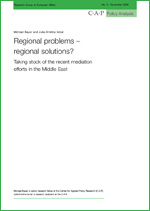 
For decades the Middle East has been one of the most unstable and unsafe regions in the world. Trying to resolve the regional conflicts is a prime goal on the agenda of many governments and international institutions. Nevertheless, most of the peace initiatives proposed by outside actors so far have failed, as their proposed solutions to the conflicts often did not really take into account the political realities in the region, but instead were more oriented towards the interests of the external actors. This instance is particularly apparent in the case of the current US administration. After having already failed at attempting to reorganize the political landscape of the Middle East through power politics, the administration of President George W. Bush turned to diplomacy in order to achieve its goals in the region. However, when that change of attitude gradually evolved the credibility of his administration was already weakened to such an extent that none of the regional players appeared to accept them as a serious partner in the handling and, ultimately, resolving of the various conflicts. What is more, its rhetoric notwithstanding, the US also failed to offer a promising solution to the conflicts. At the same time, neither the so-called Middle-East Quartet (consisting of the US, the European Union, Russia, and the United Nations), nor the Europeans themselves have been able to step in and fill the growing diplomatic vacuum. Instead regional actors have taken on the task of settling the regional disputes. Saudi Arabia, Turkey, and Qatar, to only name a few. Their approach: refraining from proposing ready-made solutions, and instead focusing on the negotiation process, including the stake-holders and taking into account their specific interests, dealing with a single issue at a time, and not putting pressure on anyone by officially proclaiming a great breakthrough before anything has been officially agreed upon.

What are the prospects of these regional initiatives? Has US engagement in the region become obsolete? And what implications does this have for the European Union? What should its role be? These questions shall be addressed in this paper.