EU-GCC Relations in the Era of the Second Oil Boom 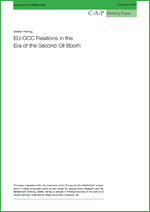 
The monarchies of the Gulf Cooperation Council (GCC) have been ever more clearly emerging as the hub of the whole Middle East region. Despite somewhat increased interest in recent years, the EU is still badly neglecting the GCC compared to other, arguably less important regions.

The European Union runs the danger of missing out in a crucial period of in which the decks in the Middle East are reshuffled, old players lose importance and new players emerge. This is although the EU has a number of comparative advantages vis-à-vis other regions that could be played out much more systematically to position itself towards the GCC.

Economic opening and sectoral reforms in the Gulf have opened up opportunities for private and public cooperation on many more levels than was thinkable only a few years ago. Economic reform is in some cases tied up with social change that in turn makes new forms of collaboration possible. Interest in the EU as a paradigm of integration in the Gulf is high and should be drawn on as a basis for cooperation, provided the important differences between Gulf and European conditions are taken into account.

Among GCC elites, there is considerable interest in the EU and its capacities. The GCC is working towards economic integration, and its individual governments have been trying to reform their administrations and economies at a heightened pace. In its relationship with the Gulf, the EU should be much more proactive in drawing on its unrivaled experience with institution-building, regulatory reform, assisted transformation, multi-level cooperation and cross-border integration.