The Future of Transatlantic Relations - Options for a New Beginning 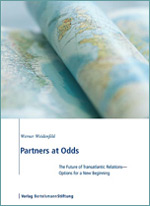 
Europe and America are currently experiencing the demise of what had been taken for granted in transatlantic relations for over 50 years. Their relationship has been sucked into the vortex of the global political upheaval that followed the terrorist attacks of 9/11. Europe and America are now faced with the task of finding new answers to the new constellations that have emerged.

As the German administration's coordinator for German-American cooperation, Werner Weidenfeld has played a vital role in shaping transatlantic politics for many years. At the same time, he has observed and analyzed them as a political scientist. It is this unique double perspective that Weidenfeld brings to his book.

Recurring on Europe's and America's common history, he shows the problems and challenges of transatlantic cooperation and outlines possible ways of improving it. For Weidenfeld, one thing is obvious: Europe and America will have to make a conscious choice. Either they continue to be "Partners at Odds"-or they arrive at a new strategic realism to shape the 21st century jointly.