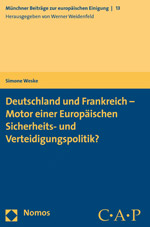 The book represents one of the rather rare attempts to analyse the development of the European Security and Defence Policy (ESDP) on the basis of a thoroughly applied theoretical framework. Despite the relative brevity of the book  it is based on the authors masters thesis  it deserves attention because it combines conceptual thinking with substantial empirical investigation.

Weske displays her guiding question in the title of the book: Germany and France: Engine of a European Security and Defence Policy? [all citations translated by N.K.]. In the introduction, she sets out her aim to move beyond the illustrative use of the outworn metaphor by developing related analytical categories (p. 13). Specifically, Weske wants to answer the question why, in some situations, Franco-German cooperation functions as a driving force and in others it does not (p. 24). According to her definition, 'Germany and France can be described as an engine in the field of the ESDP if their cooperation proves to be the necessary and the sufficient condition for progress in the ESDP' (p. 14). 'Progress' is understood as the treaty-based development of the ESDP (p. 14). Weske refers to the 'ESDP process' in a broad sense, including the treaties of Maastricht, Amsterdam and Nice, and the Constitutional Treaty of 2004. The book explores two hypotheses: (1) 'Only when Germany and France agree upon a common position, progress in the ESDP is possible (necessary condition). (2) Every time Germany and France agree upon a common initiative, coming from opposed poles of a ESDP-relevant conflict line, progress in the ESDP is possible (sufficient condition)' (p. 16). With regard to her second hypothesis, Weske concludes that, in the future, Franco-German initiatives will be 'less sufficient than before' (p. 103) for further integration progress. As concerns her first hypothesis, Weske claims that her analysis has not falsified the assumption that a Franco-German consent is necessary for progress in the field of the ESDP (p. 103). The evidence does not, however, clearly support the assumption either. The fact that Germany 'quickly joined in' (p. 36) after the Franco-British initiative at St. Malo, which paved the way for the creation of the ESDP, might underline that the set-up of the ESDP might not have been possible without the support of the biggest EU Member State. However, the necessity of a Franco-German consent in this respect is not convincingly demonstrated for this crucial moment of ESDP history.

Weske starts from the assumption that France and Germany 'often represent opposed poles with regard to ESDP-relevant conflict lines' (p. 15). The four conflict lines identified by the author are: (1) 'Civilian power versus Europe Puissance'; (2) 'Transatlantic integration versus emancipation'; (3) 'Supranationalism versus Intergovernmentalism'; (4) 'Small versus big states' (p. 25). Given Frances and Germany's basic interest to cooperate, their diverging points of departure enable them to develop 'proxy compromises' ('Stellvertreterkompromisse', p. 15) which are acceptable for the whole Union. Regarding the opposition between small and big Member States, Weske stresses that even if France and Germany both belong to the camp of the big Member States, the Franco-German engine can still trigger proxy compromises  as long as Germany is perceived as an advocate for the smaller Member States (p. 54).

Following Stephen Krasner (1983), Franco-German cooperation is conceptualized as a regime. Weske argues that Franco-German cooperation in the field of security policy features central regime characteristics, namely principles, norms, rules and procedures at the working level  even if there are hardly any binding rules of behaviour (p. 58). Given her interest in the (future) development of the Franco-German engine, Weske introduces three main types of possible regime development, namely (I) adaptation and change, (II) weakening and dissolution, and (III) deepening (p. 61). Referring to historical institutionalism and its core concept of path dependency, she underlines that the dissolution of the institutionalized Franco-German regime is not to be expected (pp. 6162).

The structure of the book reflects its theoretical approach. Chapter 2 deals with an external perspective, i.e. the impact of the Franco-German cooperation on the ESDP process. The second part of the chapter illustrates the four ESDP-relevant conflict lines. Chapter 3 takes an internal perspective, analysing why France and Germany cooperate at all (p. 55). The core of the book is the assessment of current trends of Franco-German cooperation in the field of the ESDP (chapter 4). The analysis of documents and secondary literature is convincingly enriched with insights from approximately 20 high-level expert interviews. In sum, Weske describes the German and the French position in the field of security policy to be 'very steady' (pp. 75, 80). At the same time, she points to the fact that the typical German reluctance to explicitly formulate national interests  being distinct from European interests  sometimes puzzles the French partner (p. 76). With regard to France's and Germany's self-perception as part of some kind of engine, she uncovers a remarkable divergence of views: while roughly half of the German interviewees are convinced of the existence of such a Franco-German engine (p. 81), the French experts congruently stress the importance of FrenchBritish cooperation (p. 86). The second section of chapter 4 deals with expectations regarding the future role(s) of France and Germany in the ESDP. Weske interprets the two countries' slight rapprochement with regard to the ESDP-relevant conflict lines as a deepening of the regime (p. 97). This development reduces the two countries' capacity to develop proxy compromises for the whole Union. Moreover, the author states that the regime is currently being adapted, because both France and Germany perceive a close cooperation with the United Kingdom as essential for future progress in the ESDP (p. 97). For the time being, however, Weske does not expect the emergence of a Franco-British-German regime with distinct norms and procedures (pp. 102 103), but rather continuing bilateral cooperation among these three countries. On the one hand, the strength of the book lies in its attempt to generate falsifiable hypotheses and general insights.

On the other hand, as Weske admits in the concluding chapter, there are also significant shortcomings due to her parsimonious approach. In particular, the functioning of the 'mechanism of the proxy compromise' strongly depends on the general acceptance by the other EU Member States. This crucial factor, however, is not taken into account by the two hypotheses (p. 106). Overall, the book offers a concise and well-written overview of Franco- German cooperation in the field of the ESDP. Even if its theoretical framework and the testing of the derived hypotheses are partly debatable, Weske succeeds in her basic aim to fill the metaphor of the Franco-German engine with analytical substance.