Presentation on May 20th in Berlin 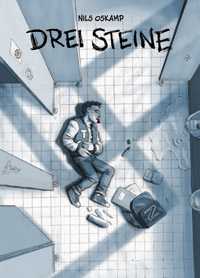 Oskamp's work is autobiographical, detailing his own survival of neo-Nazi violence, as he was a teenager growing up in Dortmund. The author states that he is sure that the graphic novel "is coming now at the right time." This past year, right-wing motivated crimes have dramatically increased in Germany, PEGIDA continues to march across Dresden as well as other cities, while right-wing and anti-foreigner political parties are gaining increasing support and power throughout Europe.

In an explanatory note about the text, the author cites figures from the Amadeu Antonio Foundation and Opferfonds CURA indicating that nearly 200 people have died at the hands of right-wing violence following the fall of the Berlin Wall. He continues to say that, "many sides simply do not want to believe it," which is evidenced by the botched NSU investigation, where the police failed to consider a right-wing motive for the murders of 10 people mostly of Turkish heritage, from 2000-2007. He also mentions that schools continue to remain a hotbed for right-wing recruitment, which is often done through music from the right scene and further abetted through social media.

While these facts and statistics are alarming, the author remains hopeful that his book will be a positive force for young people. Three Stones will bring its readers back to a story that took place in Dortmund in the 80s, where the closure of mines disrupted the economy, and where the Freiheitliche Deutsche Arbeitspartei (FAP) actively recruited in schools. The FAP’s platform blamed Jews and foreigners for society’s problems, often inciting to violence, before it was finally banned in 1995.

After young Oskamp spoke out against Holocaust deniers and Nazi sympathizers in class, he became the target of relentless violence and two murder attempts, as his teachers, the police, and his own family turned a blind eye to the seriousness of his situation. Holocaust deniers from back then still remain active in Dortmund today.

When students read Oskamp's story, they will experience his thoughts, feelings, and pain first-hand, providing them with a unique and moving view of right right-wing extremism from a victim’s perspective. While engaging with the school materials, students will also face difficult questions and topics, including how they can react to intolerance and hate themselves and how they can support victims of right-wing violence.

Three Stones should not just be interesting for students, but for a general readership as well. The graphic novel will allows its readers to draw comparisons between what happened in the 1980s and current events, linking events in the novel to the effects of the Nationaldemokratische Partei Deutschlands (NPD) or the debates on the refugee crises, for example. Three Stones and the corresponding materials teach a range of competencies from critical thinking to the ability to empathize or resolve conflicts. Even more importantly, students will also be prepared to answer the question: "What can we learn from the National Socialist past, and from Oskamp’s story, that can help us today?"

The graphic novel’s afterward states, "Every young person has their own free will to determine in which direction he or she travels in life." This is of course true, but hopefully, Three Stones and the corresponding learning materials will nudge many young people towards lives of tolerance and peace. If this is the case, Oskamp said in an interview, "then Three Stones has already fulfilled its purpose."

Author Nils Oskamp will introduce "Three Stones" (school version) and Dr. Britta Schellenberg will present the corresponding educational materials at the Amadeu Antonio Foundation in Berlin on May 20th. For additional information about the event you can visit http://www.amadeu-antonio-stiftung.de/presse/termine/3-steine/.

"Three Stones" will be revealed at a public book premier on May 12th at the Steinwache in Dortmund, a former Gestapo prison and modern-day memorial. The event will include a panel discussion with journalist David Schraven and Amadeu Antonio Foundation program director Timo Reinfrank. Schraven is founder and leader of the research agency CORRECT!V and author of the graphic novel White Wolf, which includes his accounts of the Dortmund neo-Nazis of the new generation. Reinfrank, among other things, operates the Internet platform Netz Gegen Nazis. More information about the book premier can be found at http://www.amadeu-antonio-stiftung.de/presse/termine/drei-steine-in-dortmund.

Thereafter, the 160-page graphic novel will be available from the publisher Panini Verlag beginning on June 28th. In May the Amadeu Antonio Foundation will also release a 96-page condensed, softcover version of "Three Stones" for schools, which can be ordered at www.dreisteine.com. You can find background information and lesson materials, including comics, worksheets, and videos on the website as well.

About the Author: Heather Painter is completing an internship at the C·A·P, as a fellow of the Congress-Bundestag Youth Exchange for Young Professionals Program (CBYX). CBYX is jointly supported by the US Congress and German Bundestag and has the goal of strengthening the relationship and understanding between the two countries.