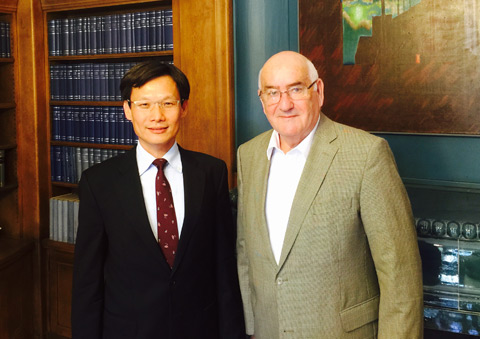 How should the EU deal with the Greece crisis? What are the realistic future prospects of a more incisive common European Foreign and Security Policy? What are the most pressing current security threats for the EU? These and similar questions were raised during the meeting of Prof. Weidenfeld and Dr. Fu-chang Chang, Associate Professor at the Graduate Institute of European Studies at Tamkang University in Taiwan.

Dr. Chang visited Professor Weidenfeld at the CAP to discuss some of the most pressing economic and security challenges which the EU is currently facing. During their meeting, Prof. Weidenfeld and Dr. Chang also discussed the idea of involving Tamkang University in academic cooperation programmes with LMU University, such as in the European Studies Program, which the LMU has been successfully running for many years now with partner universities in Thailand, Singapore, China, Australia and the Middle East.