The research group Youth and Europe at the Center for Applied Policy Research was pleased to be invited to the Bavarian State Parliament to conduct a simulation of the legislative process in Bavaria. The participants included a number of students from across the province who were interning at parliament and for various political parties. Interns from the C·A·P also took part in the simulation in October 2012.

Participants together in the grand plenary chamber.

The State Parliament, known as the Bavarian Landtag in Germany, is keen to ensure the greatest possible openness and such events regularly take place to show that there are no boundaries between the state and its people. It is especially important to the Landtag that the youth understands the way laws are passed in Bavaria. Each year the C·A·P, along with several Landtag representatives conducts over sixty simulations across the province in schools and public buildings.

After the initial greeting the participants were divided into groups that represented the five political parties currently in parliament. Each group was given a dossier containing a summary of a proposed law on consumer protection in Bavaria. They had to analyse the document focusing on food and hygiene standards and as a group come up with arguments supporting the stance of their respective parties. To further immerse the participants in their roles they had to come up with aliases for themselves as Landtag representatives  some of which were very creative indeed!

The Landtag, housed within the palatial Maximilianeum building, is one of the oldest parliaments in Europe with beginnings dating back to the 14th century. This grand setting served as an inspiration to the participants as they met in the official committee meeting rooms to hear what each party had to say about the proposed law. After some fierce debate and a series of voting the committee eventually came to a consensus.

The final stage of the simulation day saw the representatives meet in the Landtag plenary chamber. The voting results were announced by the designated president and a representative from each party had to come forward to give a closing speech. 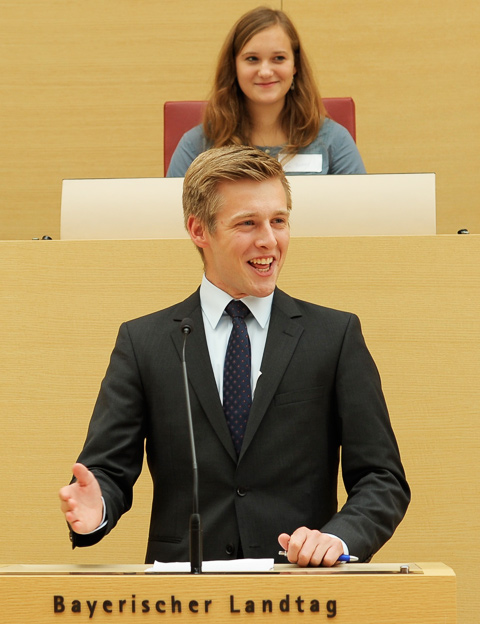 Participant engaging the plenary with his closing speech.

Andreas Sommer, an intern at the C·A·P and student at the Hochschule für Politik in Munich thoroughly enjoyed the day and was amazed by the enthusiasm of all that took part in the simulation. I was very impressed with the way that everyone stepped into their roles. The quality of some of the debates were also of a very high standard. All in all I think today has been a great insight into the workings of the legislative system here in Bavaria.

The research group Youth and Europe return to the Landtag on 5th November to conduct a schools event in cooperation with the Europe Minister for Bavaria Emilia Müller.