Being young in Serbia and Bavaria

OSCE delegation at the C·A·P

How do adolescents relate to politics? What are the origins of their disenchantment with elections? How does civic education spark their interest for the political institutions and their rules of procedure? Which topics are relevant to young people and how can youth participation be strengthened in Europe?

Such core questions of European Civic Education and Youth Policy are the main focus of the Research Group Youth and Europe at the Center for Applied Policy Research (C·A·P) fostering an active democratic awareness among young people in Europe. The aim is to develop didactic models in order to show adolescents their chances and possibilities in current European policy for their own lives.

In this context the Research Group hosted an OSCE delegation from Serbia from January 28th  30th 2009. The aim of this study visit was an insight view into the implementation of these methods in Bavaria, to discuss youth policy and to exchange experiences concerning models of civic education for young people. 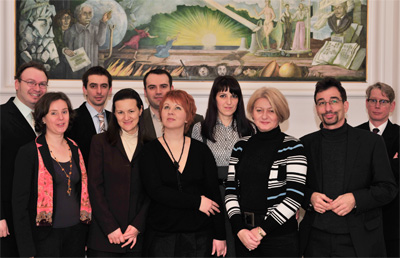 The highlight of the visit was a large Parliament simulation at the Bavarian State Parliament on January 30th under the patronage of Barbara Stamm, the President of the Bavarian State Parliament. Almost 150 pupils from different schools all over Bavaria took part in the simulation "We are Parliament!". This was the kick-off event for youth policy activities of all Bavarian parties during this new legislative period. The participants gained first-hand experience of the duties of a representative of the state parliament during the political decision-making process and the working day of a politician until a new law is passed.

This visit was also an opportunity for the Serbian delegation to conduct talks with different political partners on the latest issues concerning school and education policy. Furthermore the current stage of the Serbian-Bavarian cooperation and future perspectives in this area  especially in the field of European civic education for democracy and tolerance  was discussed.

Cooperation with the OSCE and the Serbian National Assembly

In 2006 the Research Group Youth and Europe established contacts with the OSCE Mission to Serbia with the task to strengthen the trust of Serbian adolescents in democratic institutions. Therefore, a youth parliament with 130 participants was initiated in Novi Sad in May 2007 which led to the adaptation of the methodical and didactic approach of the Research Group Youth and Europe for the National Assembly of the Republic of Serbia. For the adaptation of the Bavarian simulation according to the Serbian legislative process and conditions the Research Group Youth and Europe acted as advisory and conceptual monitoring capacity. The Serbian version of the simulation was launched in November 2008 and will be integrated into the Serbian school curriculum from the autumn term 2009 onwards. Henceforward, pupils will be able to experience parliamentary work at school all over Serbia.

Documentation of the youth parliament in Novi Sad (2007)