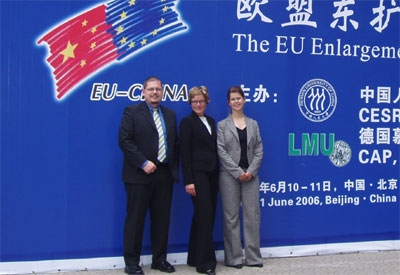 C·A·P Research Fellows Thomas Bauer, Almut Metz and Simone Weske visited China from June 7-11 2006 in the framework of the Collaborative Research Project between Renmin University of Beijing and Ludwig-Maximilians-University of Munich.

The EU enlargement in 2004 represents one of the most outstanding events in the process of European integration. It affects not only the ongoing internal integration process within the EU, but at the same time has a great impact on the world economy and international relations. Discussing the various implications of EU enlargement from a European as well as a Chinese perspective was the main purpose of the conference on EU Enlargement and Global Political Economy which took place June 10-11 in Beijing.

The conference was organized in the context of a collaborative research project between the Centre for European Studies / Renmin University of China (CESRUC) and the Center for Applied Policy Research / Ludwig Maximilians University of Munich (C·A·P). Since beginning of 2006 the two Centers jointly conduct the project The Impact of EU Enlargement on European Integration and the Global Political Economy which is supported by the European Commission in the framework of the EU-China European Studies Centres Programme. This work continues the successful long-term cooperation between C·A·P and CESRUC.

The conference in Beijing dealt with questions on EU institution building, transatlantic and EU-China relations. In his opening remarks, Song Xinning (project director at CESRUC) gave a short overview about the development of European Studies in China in general and at the CESRUC more specifically. He ascertained a significantly growing interest on European issues in China. 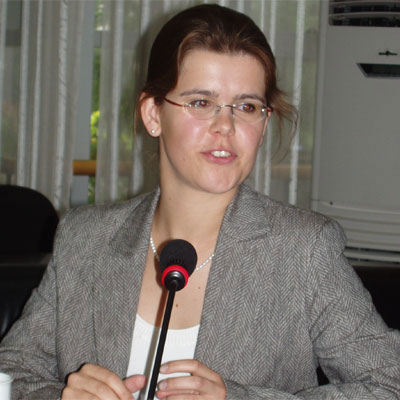 Stanley Crossick (European Policy Centre, Brussels) subsequently addressed the "strategic partnership" between the EU and China. He stated that China could learn much from the history of European integration and underlined that a functioning Sino-European partnership would be in the interest of the whole international community. In this context, Stanley Crossick called on the EU and the US not to behave like competitors vis-à-vis China.

After this kick-off speech, the first panel discussed questions on EU Enlargement and Institutional Building. Zhao Haifeng (Harbin Institute of Technology), Luc van Langehove (Centrum for Comparative Regional Integration) and Almut Metz (C·A·P, chairing the working group on institution building within the EU-China project) debated on the challenges that EU institutions face after the Eastern enlargement and on actual reforms that are taking place. Almut Metz focused in this context on the lessons to be learned from the Nice Intergovernemental Conference and the constitutional process. She underlined that facing further enlargement and new policy challenges, the EU needs to develop a coherent set of instruments to be able to effectively organize and implement future reforms.

A second panel elaborated on EU Enlargement and Transatlantic Relations. Jin Canrong (Renmin University of China), Zhou Guiyin (Naning Academy of International Relations), Sven Biscop (Royal Institute of International Relations, Brussels) and Thomas Bauer (C·A·P, chairing the working group on transatlantic relations within the EU-China project) discussed the different strategic cultures on both sides of the Atlantic as well as the impact of third states, e.g. Russia, on this relationship. Thomas Bauer underlined in his speech the importance of a revitalized partnership between the United States and Europe. He considered a good transatlantic understanding as essential for effective and prosperous EU-China relations.

A third and a fourth panel were dedicated to the questions of EU-China relations. Feng Zhongping (Institute of European Studies/ China Institutes of Contemporary International Relations), Sebastian Bersick (European Institute of Asian Studies, Brussels), Gustaaf Geeraerts (Free University of Brussels), Song Xinning (CESRUC), Gu Xuewu (Bochum University), Gudrun Wacker (German Institute for International and Security Affairs) and Simone Weske (C·A·P, responsible project manager) discussed about energy security questions as well as about different concepts of inter-regional cooperation. Furthermore, mutual perceptions of Europeans and Chinese were an issue. Referring to the Bertelsmann world power ranking presented at the Global Policy Council in Berlin in June 2006, it was stressed that EU-China relations needed to be based on pragmatic projects rather than on unrealistic expectations. Simone Weske elaborated in her speech on the role of member states in EU-China relations. She focused on the contest between France and Germany for the top position in EU's ties with China in political as well as economic terms. She concluded by stating that national competitions weaken the EU's standing vis-à-vis China and that a coherent European China policy is the only way for member states to exert influence effectively.

Franco Algieri, project director at the C·A·P and chair of the working group on EU-China relations, is already looking forward to continuing the discussions at the next conference in Munich in 2007. 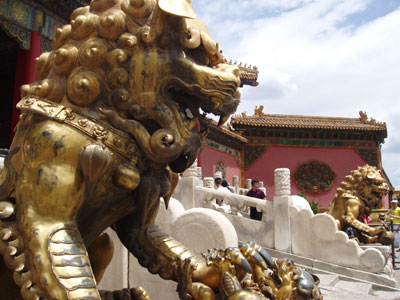