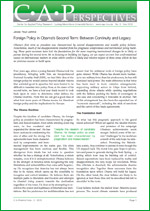 
Obama's first term as president was characterized by several disappointments and notable policy failures. Nonetheless, much of the disappointment resulted from his pragmatic compromises and incremental policy building. These quiet successes have laid the foundations for the more inspiring institutional changes he is likely to pursue during his second term.Yet in focusing on building his legacy, we can expect an even less confrontational stance on international matters in areas where conflict is likely and relative neglect of those areas which he has no previous success to build upon.