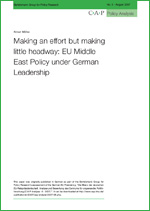 
During its EU Presidency the German government found itself confronted with an intensification of the conflict situations and with new constellations in the Middle East: Instability in Lebanon, with the simultaneous presence of European troops in the south of the country; nearly daily bombings and the ever greater probability of a failed state in Iraq; an Israeli head of government weakened by the Lebanon war; the takeover of the Gaza strip by Hamas in June 2007, and a new quality of the confrontation between Sunnis and Shiites in the region.

At the same time, a slow transformation of the roles played by the European Union as well as Germany in the Middle East can be observed. The European Union is pursuing a clear position and line of negotiation with Iran and the Europeans are a central pillar of the UNIFIL-PLUS mission in Lebanon. For the first time in its history, the Federal Republic of Germany sent soldiers to the Middle East.

Closely coordinating with its succeeding Portuguese and Slovenian presidencies, Germany formulated the following emphases for the EU's Middle East policy:

While only limited progress was made in Lebanon, Iraq, and toward Iran, the German Presidency successfully reactivated the Middle East Quartet and integrated the moderate Arab states into the international efforts for peace between Israel and its Arab neighbors.

In setting the foreign policy priorities for its EU presidency in the second half of 2007, Portugal proved reserved on the subject of Middle East policy. Considering the tense situation in the Middle East, it is easy to understand why. A small country like Portugal might find itself fighting above its weight by trying to take on the current situation in the Middle East. The departing German Presidency is called upon to continue practicing the team presidency even after passing the baton to its successor.