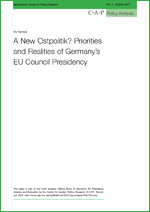 
Already in the summer of 2006 the German government announced the challenging project of shaping the European Unions eastern policy during the course of the German presidency. Overall the project is based on three pillars: a European Neighborhood Policy Plus, the revision of the Partnership and Cooperation Agreement between the European Union and Russia, which expires in November 2007 and a strategy for Central Asia.

The high expectations could only be fulfilled to a limited amount. Berlin did not managed in having its term as EU president remembered for a new PCA negotiated with Russia. Furthermore the German EU Presidency did not succeeded to concentrate the ENP more strongly toward Eastern and to offer any kind of institutional relationship with the bordering states. However the greatest success was the adoption of the European Central Asia strategy.

During Germanys presidency a trend became more obvious, suggesting that the European Unions policy toward the East will be possible only through new sorts of alliances between EU member-states. The success of further priorities of Germanys presidency, such as a European strategy for Central Asia, for the Black Sea region, and for the European Neighborhood policy, presupposed cooperation with Russia in the well-understood interest of the Union itself. The future development of European integration will be of key importance in this, as will the establishment of democracy in Russia.

Why the EU Should Differentiate More Within the Eastern Partnership
C·A·Perspectives · 1 · 2014
17.10.2014 · Christoph Schnellbach