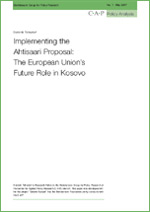 
After years of debate on the future of Kosovo and significant efforts by the international community to build functioning institutions, the Kosovo status question has returned to the international agenda and may be settled within the year 2007. The so-called Ahtisaari proposal that is currently under discussion in the UN Security Council envisages an internationally supervised sovereign entity that is committed to ensuring minority rights and special protection for all minorities in Kosovo but also allows Kosovo to become a functional state. Apart from providing Kosovo with de facto independence, another important aspect of the Ahtisaari proposal is the central role allocated to the European Union within the future setting. What consequences will the EUs prominence have on the quality of the international presence?

Since a new UN Security Council resolution will increase the EUs responsibility to help the new state strengthen its institutions and prepare for EU membership, it will be of utmost importance for the Union and its member states to commit great effort to making Kosovo fit for Europe in the years to come. While the Kosovars must make every endeavor to create a secure environment with stable and democratic institutions and an integrated society, the EU must ensure long-lasting political, financial and human resources support in order to make its presence as effective as possible. This applies particularly to assistance in the areas of rule of law and law enforcement as well as in the preparation of legislation that complies with the acquis communautaire.

The International Community Representative (ICR) should have sufficient authority to coordinate the activities of all international stakeholders and EU agencies involved in Kosovo. Although the ICR will have significant powers to shape political developments in Kosovo, it should avoid taking on an overly interventionist role. Much depends in this respect on the policymaking style and personality of the ICR. By effectively conducting the mission in Kosovo and proving that it can contribute added value to international crisis management, the EU can demonstrate its maturity as a capable foreign policy actor.