The EU and the GCC. A New Partnership.

Giacomo Luciani, Felix Neugart (eds.): The EU and the GCC. A New Partnership. 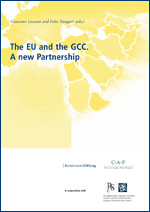 
In 2001-2, a working group on EU-GCC relations was convened and issued a Policy Paper entitled "The EU and the GCC. A New Partnership". This update revisits that paper in the light of intervening developments.

We review the consequences of regime change in Iraq and stress that, far from marginalizing the other oil producing states of the Gulf, it further increased their strategic role and value. The process of democratisation and reconstruction of Iraq is a main issue for cooperation between the EU (European Union) and the GCC (States of the Gulf Cooperation Council) in the coming years.

We then review the GCC countries progress in the direction of constitutional reform and increased political participation, and note that much more positive developments have been recorded in the GCC countries than in the Mediterranean Arab countries.

With respect to the economy, GCC countries are experiencing a period of rapid growth. The increase in the price of crude oil is a component and one of the drivers of this boom, but it is not the only driver. The process of industrialisation is speeding up significantly, led by a wave of major projects in petrochemicals and other energy-intensive industries such as aluminium smelting and transformation of minerals.

It is with respect to the strength and capabilities of the national bourgeoisie that the main difference between the Gulf and the rest of the Arab countries can be found. The Gulf bourgeoisie has become an autonomous actor, which is in many ways as important as the state in determining the short-term behaviour of the economy. EU policy towards the GCC needs to be viewed in the context of other EU regional policies and initiatives: the Barcelona Process, the new Neighbourhood Policy, and the US sponsored Broader Middle East and North Africa Initiative.

Following the entry into force of the GCC Customs Union at the beginning of 2003, the main formal obstacle to the conclusion of a free trade agreement between the two groupings has been removed. Concluding this agreement is urgent. But the EU-GCC relationship is different, and an original formula should be devised to make it fruitful. We proposes the following areas for dialogue, and advance specific proposals in each of them:

In comparison with other parts of the world the GCC remains a region of neglect on the part of the Commission. This lack of attention is a strategic mistake that should be remedied soonest.

A major change of tack is required. Substantially greater human resources within the Commission should be devoted to relations with the GCC: a new and imaginative cooperation proposal should be elaborated and put forward that goes much beyond the free trade area.

Cooperation with the GCC is not only required  it is likely to be successful and rewarding, and have potentially positive spill over effects on Mediterranean partners: indeed, it is a prerequisite for successful EU action towards the Eastern Mediterranean and Iraq.

The EU should move quickly, following the historic decision to open negotiations for the accession of Turkey, to integrate the GCC and Iraq in the European neighbourhood Policy (ENP).

While certain aspects of social and cultural norms in some of the GCC member countries are difficult to understand - and even more so to accept -, it is important to recognise that a crucially important phase in the internal political debate has opened in these countries. It is imperative that the conservative and extremist forces are defeated, and Europe can and should play an important role to this effect.