The audacity of hope: Who will become the next President of the United States?

This question has dominated the media for months. After the first primaries and "Super-Tuesday" on February, 6th, 2008, the nomination of the candidates for the U.S. Presidential election of both Democrats and Republicans still remains open. While on the Republican side John McCain seems to be unrivaled, there is a neck-and-neck race between the Democratic candidates Barack Obama and Hillary Clinton. 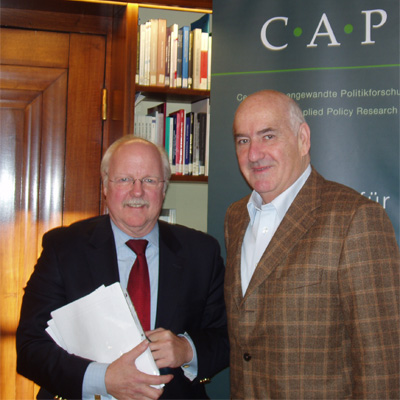 On February 11th, 2008, Dr. Jackson Janes, President of the Washington based American Institute for Contemporary German Studies (AICGS) visited the Center for Applied Policy Research to share his views on the U.S. Presidential election campaign. After a brief outline of the status quo of the candidates' race to get their partys nomination, Dr. Janes assessed the potential of the three figures in the race, John McCain, Barack Obama and Hillary Clinton.

It seems that Barack Obama has set the better stage for getting the Presidential nomination than Hillary Clinton. Even though she has been holding the larger number of delegates votes until recently. Barack Obama is celebrated as the new hope for the country, above all by the younger generation, the black population, and the media. But he is gaining field among traditional Hillary sympathizers too, for instance the Latinos. This could be a decisive factor for him to win the Presidential campaign not only against Clinton, but also against McCain. From a Republican perspective, it would be easier for McCain to beat Clinton than to beat Obama, since Clinton is a more controversial personality who is likely to mobilize people against her, too. Furthermore, many see her as a flip-flopper with regard to the war in Iraq.

Although the Democratic Party is backing Obama one has to consider that the primaries are not over yet. A clear decision can only be expected after the primaries in Texas and Ohio in the beginning of March 2008. In these two states a large number of votes are at stake. In the last resort, the Presidential nominee could finally be appointed at the Democratic national convention in the beginning of September 2008. That means a long way to go still...

Emerging issues affecting the ongoing primaries and the race to the Presidential nominations are on the one hand heirlooms from the Bush era like Iraq and the U.S. budgetary crisis, but also new challenges as for instance climate change and energy security. All Presidential hopefuls agree about the United States being the leading nation in current world affairs. But the unilateral course of action would be over, since the new U.S. President is urged to act in a more multilateral way in order to handle the global security problems. On the other hand, there are differing views of the candidates on how to tackle issues such as climate change or domestic financial market stability. But only after the primaries the focus will shift from personality to content. Up to now, we know too little about Obama and too much about Clinton, concluded Janes in his speech.

The subsequent discussion with distinguished C·A·P experts and fellows dealt with further topics and brought up unsettled questions concerning the implications of the new U.S. presidency for the transatlantic relationship. While Hillary Clinton wants to re-introduce the United States to the world, Obama Barack's concept for a revitalisation of the transatlantic partnership is still unknown. John McCain is expected to act in a manner of business as usual.  In terms of foreign policy, there is a tendency to non-isolationism. All potential candidates stress the importance of alliances and partnerships without revealing though, at least until now, where their priorities will finally be. Certainly, the White House will not be able to govern effectively without domestic constrains, in particular from the congressional side. One third of the senate and the whole House of Representatives will be newly elected in 2010.

Dr. Jackson Janes is President of the American Institute for Contemporary German Studies (AICGS). C·A·P's research fellow Almut Moeller of Europe and the Middle East program is currently visiting the AICGS as a DAAD Fellow.