The sub-conscious of the Israeli-Palestinian conflict

Prof. Amal Jamal gives a lecture at the C·A·P

On Wednesday 19 september 2007, Prof. Dr. Amal Jamal, chair of the political science department at Tel Aviv University, gave a lecture at the C·A·P and presented a socio-psychological analysis of the Israeli-Palestinian conflict. 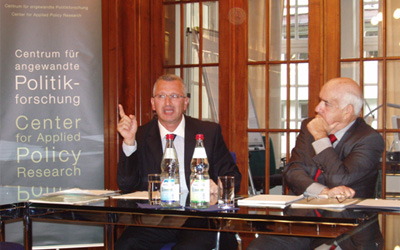 Prof. Dr. Jamal stressed what he called the "intangible" aspects that explain the stagnation of the relations between both sides. He claimed that these intangible dimensions (such as identity, conceptions of history, morality and the complex relationship between state and sovereignty) lay beneath tangible aspects such as boarders, refugees etc. He concluded that the transformation of the conflict has to be based on genuine mutual recognition and underlined the need for a third party intervention that is sufficiently impartial to guarantee the preservation of identity and security of both sides.

The following discussion with the C·A·P experts focussed on the constructive conditions for mutual recognition and the third party intervention. Prof. Dr. Jamal approved a separation in two states but underlined that this separation should not happen unilaterally. He calculated that the European Union unfortunately is not been trusted by one of the parties but is an important player that should take a more active role in the process of negotiations.

Prof. Dr. Amal Jamal is visiting scientist at the C·A·P and researches on "Jewish intellectuals in 19th century Germany and their models of integration".

Amal Jamal:
Deconstructing the Political Sub-Conscious of the Israeli-Palestinian Conflict