Scholars’ Exchange on Public Policy in Applied Research and Practice 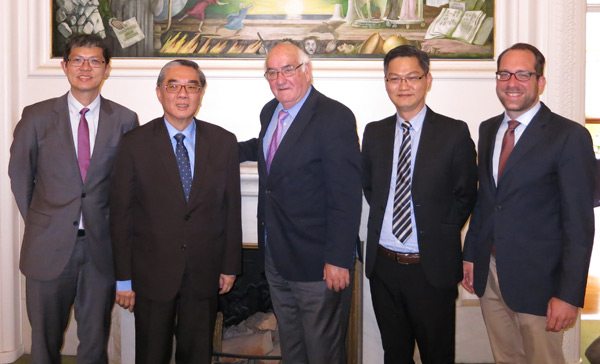 A warm welcome was given to a delegation from the S. Rajaratnam School of International Studies (RSIS) at Nanyang Technological University Singapur, headed by His Excellency Ong Keng Yong, Ambassador-at-Large at the Ministry of Foreign Affairs of Singapur and Executive Deputy Chairman of RSIS, by Professor Dr. Dr. h.c. Werner Weidenfeld and Ludwig Schulz on 25 May 2018 at the C·A·P premises. Ambassador Ong was accompanied by Dr. Tan Teck Boon and Ms Tan Ming Hui, RSIS Research Fellows, and Mr. Boon Beng Lee, Deputy Chief of Mission of the Singapore Embassy in Berlin.

The get-to-know and exchange of thought circled around the topics of public policy making and scientific advice in the comparative contexts of Singapur and Germany, as well as on current issues of global and European politics. 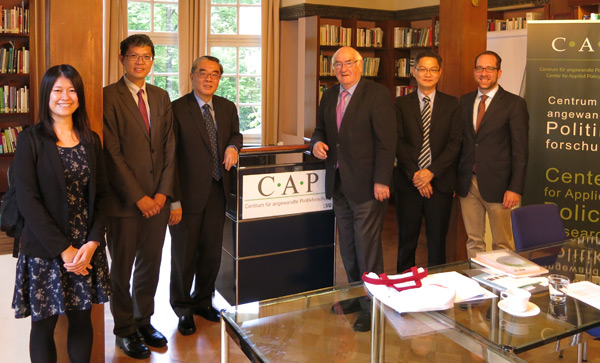 Concurrently to his Executive Deputy Chairmanship at RSIS, Ambassador Ong Keng Yong is Singapore's non-resident High Commissioner to Pakistan and non-resident Ambassador to Iran.  Beforehand, he was High Commissioner of Singapore to Malaysia from 2011 to 2014 and Secretary-General of ASEAN (Association of Southeast Asian Nations), based in Jakarta, Indonesia, from 2003 to 2008.

The S. Rajaratnam School of International Studies (RSIS) at Nanyang Technological University Singapur can be considered one of the leading research and think tank as well as graduate teaching institutions in the Asia Pacific region. Until 2007, it was known as the Institute of Defence and Strategic Studies (IDSS), which was established in 1996 by Dr. Tony Tan Keng Yam, then Deputy Prime Minister and Minister for Defence, later elected seventh President of the Republic of Singapore. In 2007, the school was named after Sinnathamby Rajaratnam in recognition of his contributions to Singapore as its first Foreign Minister.