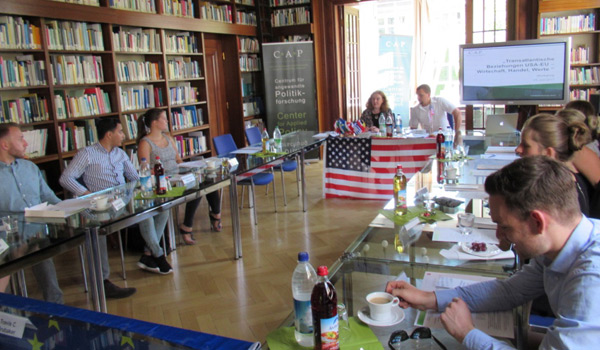 On June 3rd, 2017 the student research group 'Transatlantic Relations EU-USA- Business, Trade and Values' meet for the second time. The interdisciplinary research group was started in the 2017 summer semester by C·A·P in cooperation with the European Commission.

The students are divided in three different working groups, each with a specific research area. They are: 'Are shared Transatlantic Values a thing of the past?', 'Business: Motor or hindrance to stronger relations?' and 'Does TTIP still have a chance?'. The groups focused on creating concrete research questions, helped by a lecture and discussion of the methods and characteristics of how one goes about scientific research. Afterwards, the students presented their research questions to the other members of their working group, during which the other students offered critique and comments. During the mini-presentations, it was also made sure that there was no overlap of the research questions.

At the end of the mini-presentations, the students had the chance to speak with experts in their respective fields. Prof. Dr. Uwe Lübken of the American Institute at LMU München and Karl Bär of the Munich Environmental Institute were invited to speak at C·A·P.

Professor Dr Lübken gave an impromptu lecture on the history of transatlantic relations through the lens of the history of changing values. He started with the Americanization of Europe and Germany until the Oil Crisis of 1973, then talking in depth about the rise of anti-Americanization, for example talking about the Iraq War. He stressed that the transatlantic relationship never was a static relationship, but rather one that changed in many ways and fields. Politically, scientifically, and especially in terms of the leaders of the states themselves, it has remained a living and everchanging relationship. Thereafter the Professor gave his insights about shared values and similarities between the US and the EU. He gave the examples of the shared values of liberal democracy, and the similarities between the two economies. The conclusion was that, even with the current uncertainties and tensions between Europe and America, the history of the transatlantic relationship shows that the shared values continue to have a solid base to be based upon. 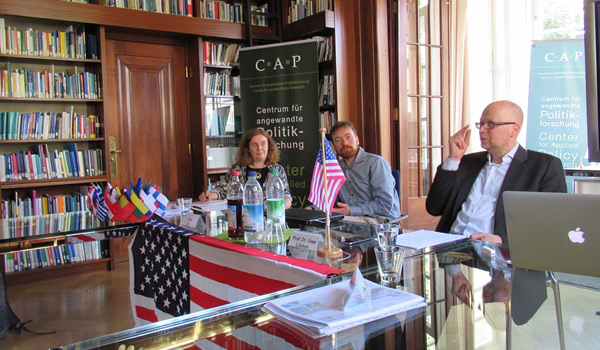 The subsequent lecture from Mr. Bär dived more into the economic components of the transatlantic relationship. Currently employed at the Munich Environmental Institute, he was able to offer unique insight into what would happen if TTIP were to go into effect, and the free trade and environmental problems that could arise. He gave the example of glyphosate usage under TTIP, and the legal, ecological and scientific problems of TTIP, especially regarding the transparency of the negations. His conclusion about TTIP with regards to consumers and workers on both sides of the Atlantic was critical in nature. In the end, he said that through international treaties such as TTIP, the power of individuals and Parliaments is limited.

Both lectures were afterwards discussed in depth with the experts in small groups. The students had the chance, to receive tips about, and ask questions over, both the lectures and their own research areas.

Following this, the students were taught the methods of furthering their research, including how to conduct Interviews with business, scientific and media experts. This was accomplished through creating a guideline to qualitative methods.  The interviews allow the students to compare previous literature of their specific research areas that they have found, with the opinions of the experts. It also allows for a more current point of view of the transatlantic relationship. After the theoretical education over how to conduct an interview, the students practiced what they learned with one another.
The next step of the research group is to create their own interview-guides, and to identify four potential interviewees. The interviews will be discussed and analyzed together at the next meeting, the 15th of July 2017.