Students from China at the European Academy of Sciences and Arts

Participating at the LMU's European Studies Summer University Program, conducted by the Center for Applied Policy Research (C·A·P), 80 students from LMU’s partner universities in the People’s Republic of China met with Prof. Dr. Dr. h.c. Felix Unger, President of the European Academy of Sciences and Arts, on 23 August 2016 in Salzburg. It was one of the highlights of this year’s four weeks European Studies Program whose academic focus was on “Next Europe”, the question of the direction in which Europe develops.

Welcoming the students to Salzburg, President Unger executed the idea of what is currently at stake in European affairs. Today’s Europe seems marked by widespread frustration over ongoing crises, raising nationalism, separation, lack of solidarity and a state of democracy endangered. In order to revive the spirit of Europe, the spirit of a common past which serves to strengthen hope and confidence into the future of Europe, a new narrative for the continent must be found. Therefore, according to President Unger, the people must be put into the center of debate and progress again. All citizens in Europe and well beyond are invited to participate in this process of global dimension. 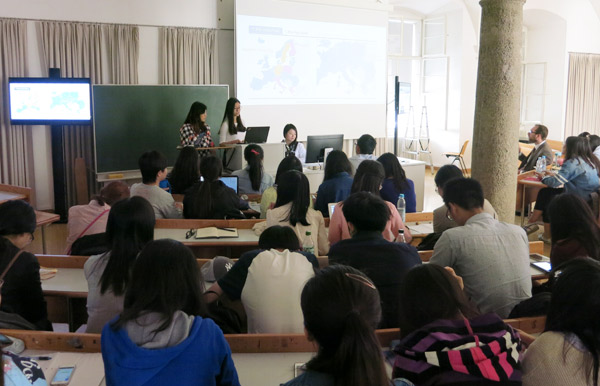 Taking up President Unger’s message, students from Beijing University, Tsinghua University, Renmin University, Fudan University, Shanghai Jiao Tong University, Tongji University and Zheijiang University took the chance to present research findings and project outlines as part of their summer university assignments. The presentations’ topics included, beyond others, the “Future of the EU in the shadow of the refugee crisis”, “From Lisbon Strategy to 2020 Strategy – Can another failure related to Brexit be avoided?”, “Populism as a challenge for Europe’s future” as well as “One Belt One Road: A good opportunity to strengthen Europe-China comprehensive strategic partnership?” or “The High Level People-to-people dialogue between China and Europe”.

Letter of Gratitude from the European Academy of Sciences and Arts, 30 August 2016