Europe and the Gulf Region – Towards a New Horizon 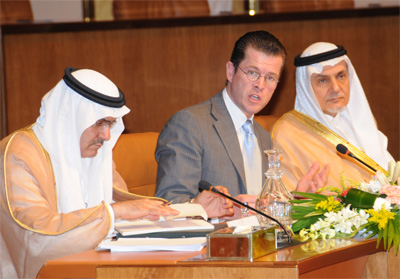 Left to right: Dr. Saad Al-Ammar, Director-General of the Institute of Diplomatic Studies, Riyadh, Dr. Karl-Theodor zu Guttenberg, Federal Minister of Economics and Technology, Federal Republic of Germany, H.R.H. Prince Turki Al-Faisal, Chairman of the King Faisal Center for Research and Islamic Studies, Riyadh, Former Ambassador of the Kingdom of Saudi Arabia to the US, UK and Ireland

The 12th edition of the Kronberg Talks was held in the Saudi capital of Riyadh under the heading "Europe and the Gulf Region  Towards a New Horizon" on May 11th and 12th, 2009. The Bertelsmann Foundation, the King Faisal Center for Research and Islamic Studies, and the Institute of Diplomatic Studies jointly organized this years event. As was the case in the preceding Kronberg Talks, the Center for Applied Research (C·A·P) contributed to the event with the Kronberg Discussion Paper, which served as guideline and point of reference for the discussion. For the first time since their initiation the Kronberg Talks were not organized in Kronberg, Germany, but in a Middle Eastern country. This move provided additional dynamic to the debates and further strengthened the profile of the event. 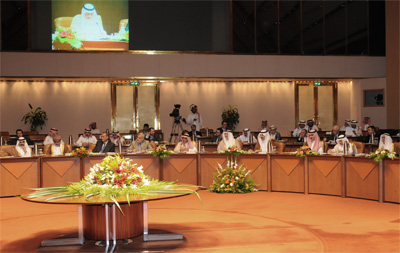 In their opening statements, the Saudi Minister of Finance, Ibrahim al-Assaf, the German Minister of Economics and Technology, Karl-Theodor zu Guttenberg, the director of the Institute of Diplomatic Studies, Saad Al-Ammar, the chairman of the King Faisal Center for Research and Islamic Studies, H.R.H. Prince Turki Al-Faisal, and the chairman of the Bertelsmann Foundation, Gunter Thielen, agreed on the need to further develop the interregional relations between Europe and the Arab Gulf states. Moreover, the speakers highlighted that both regions face many common challenges and should think of ways not only to expand their bilateral relations but also to cooperate with regard to third actors in the region and beyond.

In the ensuing closed sessions more than fifty high-ranking experts from Arab and European countries discussed Middle Eastern and Gulf issues and reflected on the prospects for strengthening the relations between the European Union and the countries of the Gulf Cooperation Council (GCC), Saudi Arabia, Kuwait, Bahrain, Qatar, the United Arab Emirates, and Oman. The discussions focused on financial and economic affairs and regional security issues as well as on the institutional framework of the EU-GCC relations. In particular, the impact of the international financial and economic crisis on the EU and the GCC and the respective roles the two regions play in overcoming this challenge and restructuring the international political economy were discussed. In terms of security policy Iran, Iraq, and the Israeli-Arab conflict dominated the debate. In this context there was consensus across the board that the new stance of the administration of US president Barack Obama was to be welcomed and should be supported. 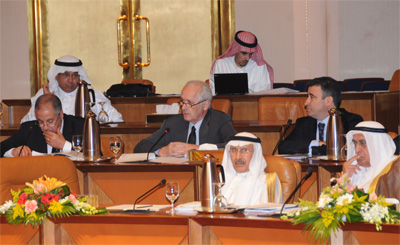 With regards to the inter-regional relations a successful conclusion of the Free Trade Agreement (FTA) that has been under negotiation for years would be a major leap forward. Yet, given the still existing differences between both sides the prospects for a conclusion look uncertain. In parallel to the political and economic relations the participants agreed that Europe and the Arab Gulf states should engage in cultural dialogue to increase mutual understanding. In particular cooperation on education and related topics would provide the relationship with an added value.

Based on the findings of the 12th Kronberg Talks the C·A·P will revise its Discussion Paper. Abstracts in English, German and Arabic can be downloaded here: