Uneasy times in the Middle East

Asaf Ichilevich, First Secretary at the Israeli embassy in Berlin, at the C·A·P

On June 5th, the First Secretary of the Israeli embassy in Berlin, Asaf Ichilevich met with scholars of the Center for Applied Policy Research (C·A·P) to exchange thoughts on the political and security situation in the Middle East. 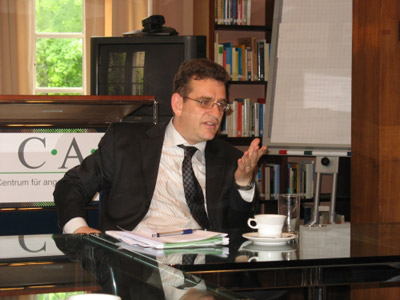 There was agreement across the board that Iran and its nuclear programme stand at top of the security agenda in the region. As a result of the rhetoric of President Mahmoud Ahmadinejad and Teheran's role in Lebanon and the Gaza, Iran's nuclear programme is perceived as a serious threat in Israel. But also the Gulf States are gravely concerned regarding the Iranian nuclear ambitions and the countrys regional role.

Other aspects of the discussion were the forthcoming U.S. elections and the uncertainty about the future President's policy towards the Middle East. Whereas the Republican candidate John McCain had made his foreign policy agenda already fairly clear, the Democratic candidate, Barack Obama, still seems to be in the process of developing his concepts. There was the expectation that both candidates will call for a stronger engagement of the European states in the Middle East, especially in Iraq. 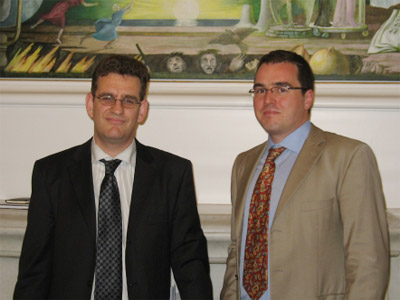 The European-Israeli relations were also discussed with reference to the Mediterranean Union. Although many details of this new political approach still remain unclear, Israel was among the first countries to support and embrace this European project.

A specific dynamic could be observed recently in the Syrian-Israeli relations. The countries engaged in peace-talks that were mediated by Turkey. Whereas the political and strategic substance of the negotiations are well known, the psychological factors remain to be solved, especially the question of how to build trust between the two parties. Be that as it may, a success of these negotiations would positively impact in the region far beyond the bilateral Syrian-Israeli relations.