Experts from the region, the European Union and the US discuss with diplomats and journalists.

The situation in the direct neighbourhood of the European Union has come to a head in recent years. The Israeli-Arab and the intra-Palestinian conflict with the coup of Hamas in the Gaza Strip in June 2007, the uncertain future of the statehood of Lebanon, the imminent disintegration of Iraq and the conflict on Iran's nuclear programme: these different levels of conflict are not only interwoven, they also have regional, if not international impact. With the start of negotiations for an accession of Turkey to the European Union the hot spot Middle East has come closer to the EU.

Against this background the project "Europe and the Middle East" jointly conducted by the Center for Applied Policy Research and the Bertelsmann Foundation convened experts from the Middle East, Europe and the US to engage in a debate with diplomats and journalists to foster a better understanding of these regional developments and to discuss how to address the new security challenges in the Greater Middle East. Four successive workshops were held in Bonn, Brussels, Berlin, and Lisbon, where policymakers have just taken over the rotating presidency of the European Union from Germany. 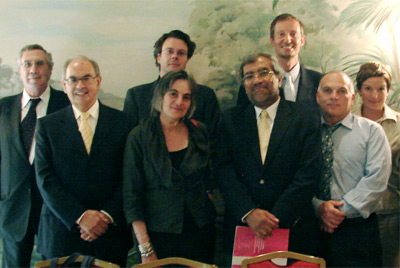 Workshop panelists and their hosts at the Instituto de Estudos Estratégico e Internacionais (IEEI) in Lisbon.

Daniel Serwer, Vice President of the Center for Post-Conflict Peace and Stability Operations at the United States Institute of Peace and an important contributor to the drafting of the Baker/Hamilton Report on Iraq underlined that the US was seriously weakened as a regional security actor because of its Iraq policy. But at the same time, the US is facing a new serious security challenge with Iran and its nuclear ambitions, that according to Serwer was clearly ranking on top of the US agenda in the Middle East, even above Iraq.

The domestic and foreign policy changes that Iran is going through, according to Anoush Ehtemshami, Head of the School of Government and International Affairs at Durham University, are part of a "geopolitical earthquake" in the Middle East. Ehteshami discussed the regional and international implications of Iran's regional ambitions. Reza Molavi of Durham University's School of Government and International Affairs, who replaced Ehteshami in the second part of the workshop series, shed light on the Iranian national interest by explaining the ideological background of Iran's regional aspirations and its wider targeted focus on the Muslim and the third world countries. The 20-Year-Vision Document ("Cheshm Andaze Bist Saleh") adopted in 2005 envisages Iran to solidify its position of being a recognized regional power by the year 2025. The 20 year Vision document, Molavi argued, ties in transparently with the national interest considerations and foreign policy priorities of the current Ahmadinejad government, in the Islamic Republic of Iran. The situation in the Israeli-Palestinian conflict has deteriorated in the last months. Israeli Prime Minister Olmert is domestically weakened due to the accusations of the Lebanon 2006 war report. The Palestinian camp split after days of violence into two separate entities in June 2007, with Hamas taking over the Gaza Strip and Fatah dominating the West Bank. However, Avi Gil, a senior strategic adviser of the Center for Middle East Peace and Economic Cooperation in Jerusalem, still sees the chance for a renewed peace process in the current situation, because there was no alternative. Strong leadership and the support of third parties were needed to bring Palestinians and Israelis back to the negotiation table. Khalil Shikaki, director of the Palestinian Center for Policy and Survey Research in Ramallah, was less optimistic. Shikaki doesn't see any chance of improvement on the Israeli-Palestinian front without a stabilization of Palestinian domestics.

Ziad Majed, Political Researcher at Sciences-Po Paris, elaborated on scenarios for the future of Lebanon, and discussed the role of the UNIFIL mission in the south of the country. According to Majed, Europe could play a very important role because it is still accepted as a mediator by different actors. It should push for peaceful solutions with Iran, and for the respect of all UN resolutions on the Arab-Israeli conflict, as these are keys for a long term stability in Lebanon and the region. Christian-Peter Hanelt of the Bertelsmann Stiftung and Almut Möller, researcher at the Center for Applied Policy Research, concluded the sessions with short and mid-term recommendations for the European Union's policies towards the Greater Middle East.

Papers and conclusions of the workshop series for download:

Ziad Majed: Lebanon and the Middle East: A Ray of Hope Amidst Chaos and Conflicts?

Daniel Serwer: The US, Iraq and the Middle East

Christian-Peter Hanelt and Almut Möller: The Mediterranean, the Middle East and the Gulf Region  A Difficult Neighbourhood for Europe