Afghanistan as defining test for the alliance

On February 12th, 2007, William M. Drozdiak, President of the American Council on Germany, visited the Center for Applied Policy Research, one day after the interesting and provoking 43rd Security Conference in Munich. Mr. Drozdiak presented his impression of the event and the atmosphere at the Conference and provided possible reasons for the verbal attack of Russia's President Putin against US foreign policy. He furthermore outlined his general view on the transatlantic relationship as well as the prospects for Democrats and Republicans in the upcoming US presidential elections campaign. 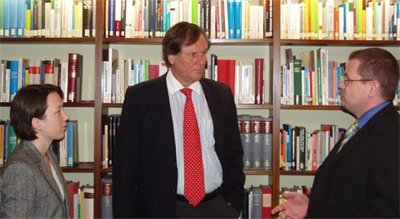 In the subsequent debate members of the C·A·P-staff and some external guests discussed the relationship between Europe and the United States. One main issue of interest was NATO's engagement in Afghanistan as well as the debate concerning a stronger European commitment in fighting the Taliban especially in the Southern parts of the country. Drozdiak declared this contribution to be the defining test of the future of the NATO alliance. Another important topic adressed by the participants was the nuclear dispute with Iran and the transatlantic options for finding its resolution. Iran and Afghanistan were also discussed in the light of the lack of public awareness of security and defense issues. The participants agreed that a more open-minded and broader debate concerning the security challenges and the comprehensiveness of security policy is needed in order to gain more public support for the conflict-management efforts of NATO, EU and the UN.

As a former journalist and foreign correspondent for The Washington Post, The Washington Star, and the TIME magazine, Drozdiak also presented his view on the upcoming presidential elections in the United States. He spoke about the prospects of Hillary Clinton, Barack Obama and John Edwards on the Democrats side and John McCain and Rudy Giuliani from the Republicans to succeed George W. Bush in office after 2008.

Prior to his position as President of the American Council on Germany, William M. Drozdiak was Executive Director of the Transatlantic Center of the German Marshall Fund of the United States, the cooperation partner of C·A·P in its Improving Responsiveness Program.

Obama's vision of nuclear non-proliferation
The cases of North Korea and Iran highlight the weaknesses of the current non-proliferation regime
29.06.2009 · By Mark Hirschboeck
AKTUELLE C·A·P-NEWS