Goals - Strategies for the 21st Century

Whether they are dealing with the war on terror, globalization processes or EUs neighbourhood issues, todays decision-makers are confronted with multiple challenges that have a direct impact on citizens lives. Policymaking issues are increasingly complex, and social and political actors at both the domestic and international levels enjoy limited room for manoeuvre. Short terms of office often make it difficult for politicians to focus their sights on longer-term, broader developments. Economic actors are increasingly asked to take positions in political and ethical debates.

In the world of the 21st century, there is a growing, daily need for long-term strategy consulting and for soundly researched reference points for policy, business and society. Only the leaders who can recognize trends today, and take decisions designed for the next five to ten years, will have lasting political success.

Political science in Germany must also take up this challenge. The discipline possesses great reserves of understanding, but all too often lacks the knowledge of how to communicate that understanding in order to find timely solutions. The scientific community needs to find more than just answers to theoretical questions. Academically sound political advisors should also help to solve political problems of the present. By this means, they could make important contributions to democratic decision-making processes. 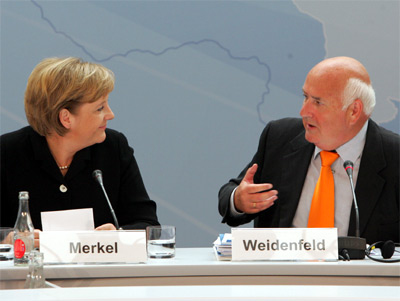 As an independent think tank, the C·A·P uses its unique working methods of "applied policy research" to close the gap between politics and academia.

The Center for Applied Policy Research is the largest university-based institution in Germany for political advising on European and international issues. It was founded in 1995 by Prof. Dr. Dr. h.c. Werner Weidenfeld as a home for practice-oriented, externally-financed research, aligned with the chair for political systems and European unification of Munichs Geschwister-Scholl Institute for Political Science at the Ludwig Maximilian University.

The C·A·P draws its operating funds from projects and partnerships with foundations, government institutions and corporations. The Center brings together academic understanding in order to work out strategies and options for current issues in politics. The Center's Research Groups and projects combine international and interdisciplinary analysis with concrete suggestions for political practice.

The C·A·P uses this approach to advise political leaders on decisions about different issues. Simultaneously, it communicates the results of its work to the public and to a large number of opinion shapers via publications and the Internet.

Our profile offers a detailed survey of the institute.