Meeting with the Bavarian Prime Minister 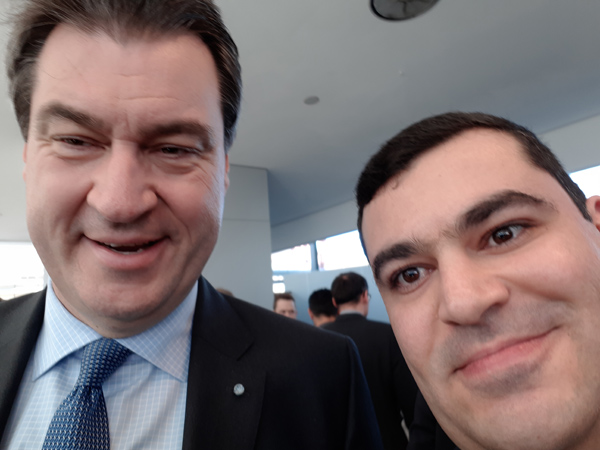 On March 30th, the Brazilian tax lawyer and political researcher, Rafael Gontijo de Andrade Brasil, who is a German Chancellor Fellow (2018/19) at Alexander von Humboldt Foundation, having the Centrum für angewandte Politikforschung (C·A·P) as his host institution, met the Prime Minister of Bavaria and leader of Christian Social Union political party, Mr. Markus Söder, at the 2019 European Congress of CSU, in Nuremberg.

The Bavarian Prime Minister has been told by Rafael Brasil about the German Chancellor Fellowship, which is a prestigious leadership programme that congregates 50 researchers from Brazil, China, Russia, India and the USA, being 10 of each country. Mr. Söder has praised the initiative for its multicultural feature and strategic importance. At the end of the conversation, Rafael informed Mr. Söder that the fellowship was established by Prof. Dr. Dr. h.c. Werner Weidenfeld, who is the mentor of his project in Germany.