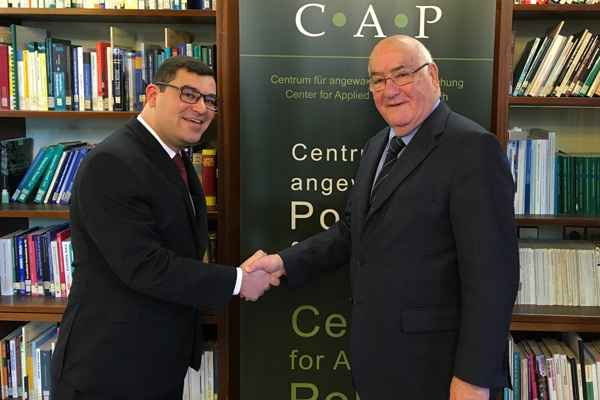 Rafael Gontijo de Andrade Brasil holds a bachelor's degree in law from Universidade Cândido Mendes, and has been working for one of Brazil's most influential think tanks in favor of political and economic liberalism, Instituto Millenium. A tax lawyer by profession, he has been engaging in a newly founded government relations firm in which he obtained a leadership position in charge of relation with the Brazilian Federal Government, the Congress, and other public institutions, as well as in the Brazil More Competitive Initiative by which he and likeminded liberals advocated successfully for reforms in the Brazilian capital market legislation.

Mr. Brasil's research topic focusing on a comparison between the German and the Brazilian party systems in terms of finance and transparency, is of utmost importance. It is obvious that the Brazilian democratic consolidation is at a crossroads from which one way leads to further polarization and potentially away from democracy, and the other, more rocky road can lead to stronger democratic institutions and accountability of politics, in which the Congress and the political parties play a decisive role. Germany, by comparison, is a stable democracy with resilient processes and institutions and a strong parliamentarianism; however the multitude of crises of recent years has lead to largely unexpected dynamics in Germany's party system with the rise of the Alternative für Deutschland which will challenge German politics inside and outside the Bundestag for the years to come. Thus, by focusing on the party systems of both countries, Mr. Brasil has chosen a very relevant topic which, beyond the two cases, address further questions such as on institutionalization vs. personalization of politics, the future of party systems, or institutional learning processes between Europe and Latin America.