Is the US Rebalance to Asia real?

Discussion round with Dr. Ashley Tellis


On September 17, the C·A·P had the honor to host a discussion round with Dr. Ashley Tellis in cooperation with US Consul General William Moeller. Dr. Tellis is a Senior Associate at the Carnegie Endowment for International Peace, specializing in international security, defense, and Asian strategic issues. 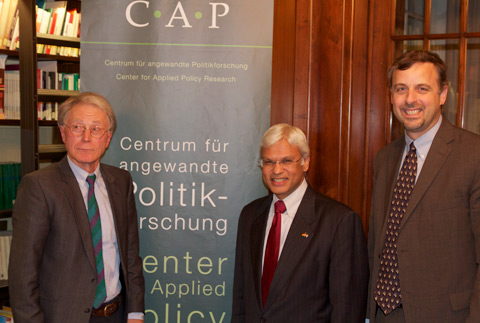 In his presentation, he addressed the European concerns on what has been called a U.S. "rebalance" to Asia and stressed  like US Secretary of State John Kerry  that the rebalancing will not come at the expense of relations with Europe.

On the other hand, Dr. Tellis presented his vision for a new US strategy towards Asia amidst great upcoming challenges: The return of regional heavy-weights like China to power may lead to disequilibrium in the region. Yet unlike US strategy during the 20th century, the use of containment towards these powers is not an option, as they are allies, competitors and adversaries at the same time. He emphasized the importance of building strong diplomatic, economic and strategic ties with Asian allies, while developing a more differentiating and subtle strategy to deal with regional competitors.