Discussions about Germany's role in an electoral year 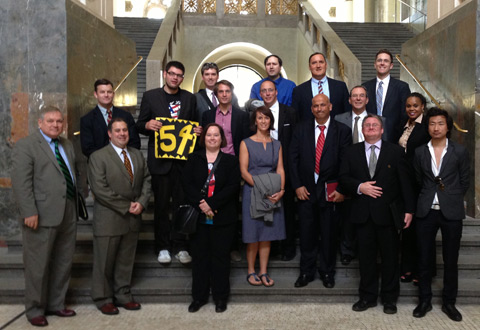 A delegation from the University of Southern Mississippi, led by Dr. Robert Pauly and consisting of staff members and PhD candidates of the International Development Doctoral Program, has visited the LMU. After Dr. Susanne Döring of the LMUs International Office had presented the university and its research profile, Edmund Ratka and Johannes Meiners from the Center for Applied Policy Reserach (C·A·P) were giving presentations and had a roundtable discussion with the US-American guests on current domestic and foreign policy issues. Mr. Meiners was speaking about the political situation within Germany, pointing in particular to the role of Angela Merkel and her re-election strategy of asymmetric demobilisation as well as to problems in the Social Democrats election campaign. Mr. Ratka, on his turn, elaborated on Germanys role in Europe and in world politics. He emphasized that some of Germanys traditional foreign policy paradigms are fading into the shadow, but are not yet replaced by new ones, leading to a more unpredictable foreign policy. In a lively and stimulating discussion, the delegation members of the University of Southern Mississippi, most with a professional background in business, military, public administration and academia, were in particular interested in the political role of immigrants in Germany, the economic situation within the country, priorities in the upcoming election campaign as well as in Germanys potential leadership role within in the EU and in international crises such as the Arab Spring.