Conference in Budapest organized within the EU-Consent project

The crisis management has become the main task of the EU team presidencies and it has given a new profile to the rotating presidencies in the new member states, including the new approach between deepening and widening.

The Friedrich Ebert Stiftung jointly with the Comenius University Budapest organized a conference which tackled these challenges. The event was chaired by Prof. Dr. Attila Agh and was part of a conference series organized within the EU-Consent project. 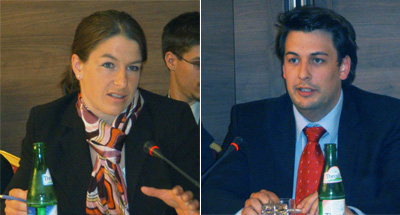 The Center for Applied Policy Reseach (C·A·P) was represented by Sarah Seeger and Sebastian Schäffer. Sarah Seeger elaborated on the upcoming European elections. She stated that, against Eurosceptic tendencies in many EU member states, the results of the elections could turn into significant constraints for the crisis management of EU presidencies and decision-makers.

Sebastian Schäffer focused on the Eastern Partnership (EaP) of the EU, especially on its advantages and challenges that need to be tackled by the current Czech and the upcoming Swedish presidency. If those countries are able to tackle the internal and external problems of the EU and its Eastern neighbours, the EaP has the potential to become a real 'European Neighbourhood Policy plus', Sebastian Schäffer concluded.