Simulation of the legislative process

Sustainable trust in democratic institutions is one of the most important societal ingredients for the consolidation of a democracy. Therefore the Serbian National Assembly has set the focus especially on the young publicity and their relationship towards the democratic structures in their public relations. In August 2008, an action plan has been finalized by more than ten Serbian ministries in order to implement the "National Youth Strategy", which will enable the young people of Serbia to actively participate in all aspects of the Serbian society. 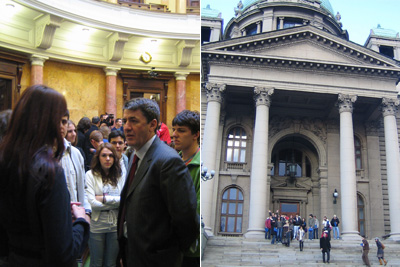 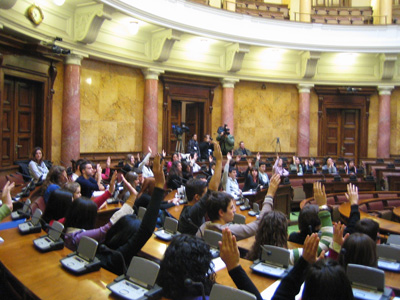 After an intensive test phase, consisting of a one year-long conceptualization, the simulation was inaugurated officially in the Skupstina, the Serbian parliament, on November 22nd, 2008. About 40 Serbian students between 16 and 17 years took part at this cap-stone event and debated on a bill concerning environmental issues. The reception in the media and by the political side was exceedingly high: six television stations followed the opening part and broadcasted it across the country. No wonder, as the formal opening was conducted by the Madame Speaker, Slavica Dukic-Dejanovic, President of the Serbian National Assembly. Address of welcome were given by the National Minister for Education Zarko Obradovic and the Head of the OSCE Mission to Serbia, Hans Ola Ustad. 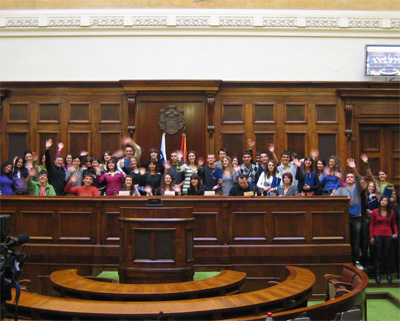 Dimitrije Kotur, one of the participants, summarizes the event as follows: "However, a lot of us think this was the most interesting thing that has ever happened in our life. We had a chance to be a Member of Parliament and to debate about the future of our country. Although it was just a simulation, I think we managed the assembly session very responsibly and proved that democracy is supported by young people in Serbia."

From the autumn term 2009 onwards pupils will be able to take part in the simulation of the Serbian National Assembly all over Serbia as this simulation will be introduced as part of the active citizenship curriculum at school.

Projects of the Research Group Youth and Europe at the C·A·P are financed by the federal children and youth plan of the Federal Ministry for Families, Women, Seniors and Youth.