Networking for the EP Elections 2009

From 11-13 June 2008, the Federal Agency for Civic Education hosted the conference "Networking for the European Parliament Elections 2009" in Strasbourg. The conference, co- hosted by the Dutch Institute for Political Participation  and the Austrian Federal Ministry of Education, Arts and Culture, was the fourth meeting in a series of European civic education networking conferences that had previously been held in Santiago de Compostela, Berlin, and Lisbon. 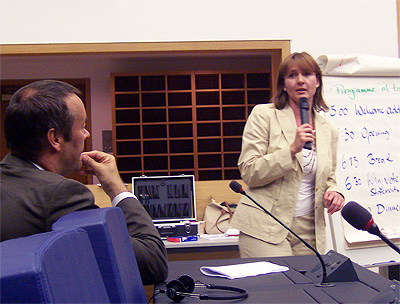 The conference was organized to give European multipliers in the field of citizenship education access to information and opportunities for exchange in the areas of existing and planned models, measures and projects for mobilizing voters in the European Parliament elections 2009. The seminar was held at the European Parliaments seat in Strasbourg and was attended by 130 participants engaging in civic education from 17 European countries. It provided a platform for sharing experiences of previous campaigns and for discussing best practices and common projects for 2009.

In the opening panel, Aurora Tranescu of the European Commissons General Communications Directorate analyzed the roots of the 2005 European Parliament elections results, in particular its low voter turnout. José Manuel Talero García, Board Member of the European Association of Political Consultants, added his experience as a campaigner in previous elections and elaborated on ways to overcome citizens EU and voting fatigue. Julian Popov, Chair of the Board of Directors of the Bulgarian School of Politics, added the perspective of a new EU member state. During the panel discussion the IPPs "Interactive Voting System" was introduced and tested.

On the second day of the conference, before entering the workshops, Jens Tenscher, Professor at University Koblenz-Landau, gave a comprehensive overview on European Parliamentary Campaigns, Political Parties, Mass Media and Voters. 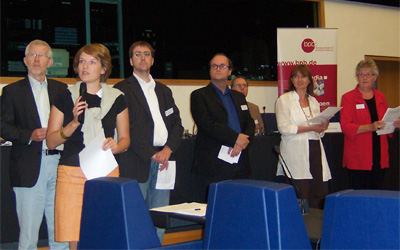 In six different workshops the participants then discussed methods and measures of voter mobilization. In building on successful projects  such as "Wahl-O-Mat", "StemWijzer"  and "JuniorVoting"   the participants explored potential fields of co-operation amongst each other. To give a few examples, Wahl-O-Mat and Stemwijzer are currently working on their "europeanization" as "European VoteMatch 2009" . JuniorVoting is exploring ways of co-operation with the Polish Center for Citizenship Educations , the Netherlands IPP  and Germanys "Politikfabrik"  voter mobilization campaigns. The second day was concluded by an impulse of Baha Güngör, head of the Turkish service of "Deutsche Welle", followed by a panel discussion on Turkeys perspective to accede the EU as a member.

Day three of the conference started with a presentation by Pierre-Etienne Métais of "welcomeeurope" on how to successfully apply for EU funding and how to implement projects related to the 2009 elections in practical terms. His presentation was followed by a "world café" in the lobby, in which the participants had the chance to present the results of the workshops and to look for further networking opportunities. Rainer Wieland, member of the European Parliament, wrapped up the conference in presenting his thoughts on the upcoming elections and the future of the European Union.

The conference was moderated by Susanne Ulrich and Almut Möller of the Center for Applied Policy Researchs "Academy for Leadership and Competence" in Munich. The next conference in the series will be held in Bulgaria in the fall of 2008.