The NATO notion of security

Soldiers are usually "at the end of the stick", namely the ones that have to carry out the decisions taken by the North Atlantic Council (NAC) or other decision making bodies of NATO. During a two-day seminar of the Research Group Youth and Europe on security identity, political structures and values of the NATO the stick was turned around and the soldiers found themselves in the position of decision makers who had to reflect the process of decision making concerning the use of the NRF (NATO Response Force) - by definition a "highly ready and technologically advanced force made up of land, air, sea and special forces components that the Alliance can deploy quickly wherever needed." This force gives NATO the necessary means, in order to respond rapidly to crises anywhere in the world. 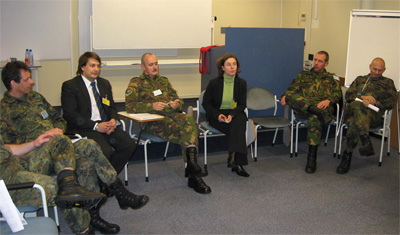 Such a crisis management was simulated during the seminar: The scenario of the simulation "NATO in action" dealt with the burning issue of piracy at the Horn of Africa. As foreign ministers of the 26 member-states in the North Atlantic Council the soldiers had to consider whether NATO should react by analyzing the threat. At the end of the two days they had to come to a consensus on the appropriate measures which should be taken and overtake the political responsibility.

Eva Feldmann-Wojtachnia (Research Group on Youth and Europe) and Sebastian Schäffer (Research Group on European Affairs) conducted the seminar for 30 NRF soldiers based at DARS-NM (the Deployable Air Control Centre Recognized Air Picture Production Centre Sensor Fusion Post) in Nieuw Millingen, the Netherlands. The seminar was held on 25/26 November 2008 and aimed at fostering knowledge about how decisions are taken at NATO. The seminar was split into three parts. During an overview at the beginning the participants from several NATO nations got the necessary background information about the NATO decision-making process and about the NATO Response Force (NRF). Furthermore the very own notion of personal and political security was developed in small multinational groups and afterwards discussed at the plenary. Both information enabled the soldiers then in the second part to take over the role of a foreign minister of a NATO member country during the simulation. In an urgent NAC meeting the soldiers had to consider their personal opinion but first and foremost the interest of "their" country and government represented. No participant was thereby allowed to represent his or her home country in order to foster political empathy and to get to know a new country's point of view.

The third part concluded with an evaluation of the seminar itself and the outcomes from the position of the participants. During the final discussion round on "NATO, the NRF and crisis management - future perspectives of for the transatlantic security" the following questions came up:

The positive feedback given at the end showed that these core questions cannot be resolved during a two days seminar, but help to understand more clearly the aims and complexity of security policy in our world. Although many of the soldiers found it hard to switch from decision-taker to decision-maker in such a short period of time, the discussions remain relevant to the current and future tasks of NATO missions.

Projects if the Research Group Youth and Europe are financed by the Federal Children and Youth Plan of Federal Ministry for Families, Seniors, Women and Youth.