Intercultural Learning at the Transatlantic Forum on Migration and Integration

The first Transatlantic Forum on Migration and Integration (TFMI), from 9-13 July, 2008, brought together 60 emerging leaders from 20 different countries at the castle of Pommersfelden, close to the city of Nürnberg. The forum represented the premier of an annual platform for the convening of future decision-makers and an international forum for exchange on crucial immigration and integration issues. International migration and the resulting challenges of integration are a highly debated topic and will dominate the global policy agenda in the future. This forum, organized by the German Marshall Fund of the United States and the Robert Bosch foundation, aimed at widening the expertise of young, highly qualified, and specialized experts from various professional backgrounds in order to guide the political decision-making process and shape the public discourse.

Initiated by Dr. Tanja Wunderlich (GMF) in cooperation with Teamerlebnis Leipzig this simulation was outstanding and a one-time opportunity to stimulate the intercultural dialogue among the participants. By this activity representatives from "sending and receiving countries" at one table come together to talk through migration topics from different perspectives on equal terms: participants from countries like Morocco, Netherlands, China, Philippines, Poland, Romania, Senegal, Tanzania, Turkey, UK, Dominican Republic and Gambia. The simulation game as an interactive method of positive stimulation and common reflection on migration in the succeeding evaluation aimed at answering concrete questions of integration policy. This was facilitated through the role profiles that ensured engagement of everyone and led to common conclusions within the group. During the current European Year of intercultural dialogue 2008 this project provided a great additional opportunity to reflect Europe´s cultural diversity against the background of a transatlantic setting.

Simulation Game "Babylon in our city"

Next to several workshops and lectures on the topic of migration and integration, the participants were invited to take part in a rather unusual feature: the simulation game "Babylon in our city"  developed by the Research Group Youth and Europe. This simulation deals with the topic of integration on the local level is set in the small, fictive city of Auenburg, with a relatively high percentage of immigrants. Although everything has been peaceful and integration was perceived to be successful, an initiative from the "Intercultural Friendship Association - The Bridge" has caused an uproar. Their demand to increase the share of foreign books in the public libraries according to the percentage of immigrants is meeting fierce opposition from the "Club for Civic Education", a traditional club of well-off citizens. They are threatening to cut their generous donation to the public libraries, should the proposal be adopted. This tense atmosphere provides the framework for an open council meeting with all interested citizens of Auenburg. Due to the size of the group, the simulation in Pommersfelden was done in three different settings: in three small cities (Auenburg, Riesenau and Marienstein) at the same time. The final reflection in the plenary revealed how the same preconditions can lead to different outcomes, but also how certain power relations remained the same. 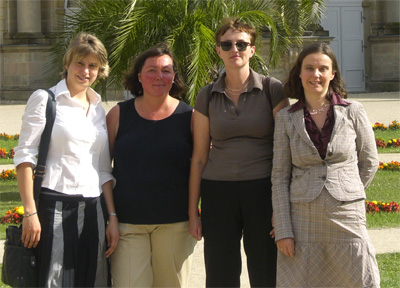 In general, applying the method of a simulation is useful to give participants a totally different viewpoint and helps to relinquish ones own position which is influenced, for example, through ones own background, experiences, and professional life. The simulation "Babylon in our city" by the Research Group Youth and Europe, showed real life problems and therefore also possible explanations for inadequate policies. The participants soon realized the difficulties that arise when new proposals are presented. It is easier to defend the status quo than to fight for innovative policies and a constructive solution. Often, it is quite easy to demand integration efforts from immigrants while the concrete steps seem to be rather constrained. Nevertheless, according to the evaluation all participants gained interesting new insights for integration policy on the local level. Furthermore, a better understanding of the problems that are likely to occur were presented as a first-hand experience.

Education for integration - a core task

Within the framework of the Research Groups current project "Changing Europe" this pilot project has given interesting insights into the question of how intercultural learning can have an impact on educational questions concerning integration policy. Against the background of the current European Year of Intercultural Dialogue 2008 the presented simulation is an appropriate tool to foster democratic citizenship and tolerance and to deliver background information on migration and integration policies. As a member of the European Migration Network (EMN)  the Research Group Youth and Europe makes its expertise and practical know how available for migration institutions on the European level.

Projects of the Research Group Youth and Europe are financed by the children and youth plan of the Federal Ministry for Families, Senior citizens, Women, and Youth