Monitoring and guidance by the Research Group Youth and Europe

How do you spark the interest of young people for politics? How do politicians actually introduce legislation? How do you convey parliaments method of operation effectively and, more importantly, suitably for adolescents?

These questions are of relevance in Serbia as well as in Germany. Thus, the visitors' information service of the Serbian Parliament, in cooperation with the OSCE Mission in Belgrade, decided earlier this year to introduce a simulation of the legislative procedure of the Serbian National Assembly as the tool of choice, especially for young Serbians.

In order to conceptualize and develop this simulation successfully the cooperation with the Research Group Youth and Europe at the Center for Applied Policy Research (C·A·P), based on the earlier successful joint projects, was formalized as the senior research fellows Eva Feldmann-Wojtachnia and Tamir Sinai assist the Serbian partners in this area. 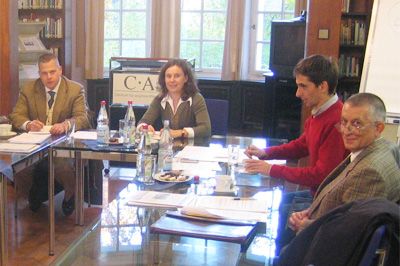 From Nov 4th  6th, the C·A·P and the Bavarian State Parliament thus hosted an expert delegation from Belgrade to issue advice concerning the structure, didactics and content of the planned simulation. Prominent amongst the Serbian delegation were Prof. Milan Jovanovic, professor for political science at Belgrade university and a specialist on legislative procedures, Perisa Jovanovic, former deputy secretary general of the National Assembly of the Republic of Serbia, Rodoljub Dinic, coordinator of the visitors information service of the Serbian National Assembly, and Vesna Dumovic, curator of the protocolls department at the National Assembly. This intensive advisory meeting was conducted by Eva Feldmann-Wojtachnia and Tamir Sinai of the Research Group Youth and Europe. At the end of this most constructive session all participants agreed on intensifying cooperation through the following: 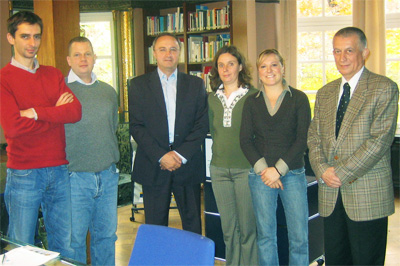 Further steps of cooperation till the end of this year include additional workshops and editing sessions in Belgrade as well as the start of a comprehensive training period for future educators. Part of the initial plan is to introduce this simulation in schools as part of the citizenship studies curriculum and to play the role game in all administrative regions of Serbia with school classes and in the presence of members of parliament - similar to the simulation conducted by the Bavarian parliament. Additionally it was suggested to officially open the simulation project with a cap-stone event in the National Assembly in Belgrade in 2008. 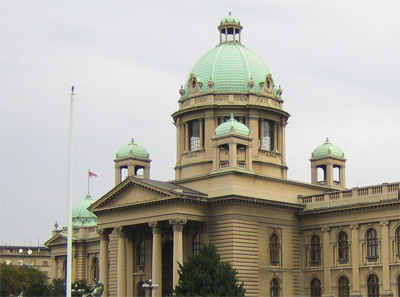 
The Research Group Youth and Europe has a long history of expertise in the field of developing simulations for the use of civic education. They were the driving force behind designing the model game "The German Bundestag meets schools  experiencing parliamentarian democracy" ("Bundestag macht Schule  Parlamentarische Demokratie spielerisch erfahren"). Since May 2005 it has been played once a week by teenagers in cooperation with the visitors' information service of the German Bundestag. In autumn 2005 a simulation akin to the national version was developed for the Bavarian State Parliament ("We are the State Parliament!" - "Der Landtag sind wir!"). Since then it has been conducted numerous times in the Bavarian State Parliament itself and will have been played in all 90 Bavarian constituencies until August 2008. The task of coordinating the implementation of the Bavarian simulation for the Bavarian State Parliament lies with Dr. Doerthe Winter-Berke, research fellow at the Research Group Youth and Europe.

Projects of the Research Group Youth and Europe at the C·A·P are financed by the children and youth plan of the federal ministry for families, senior citizens, women and youth.