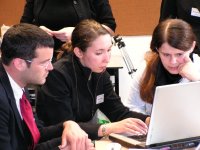 In conjunction and co-located with the NATO Defence minister meeting next week in Portoro, Slovenia, over 50 students from NATO countries will simulate NATO decision-making while deliberating on current issues on the ministers' agenda.

After having completed a three month online-tutorial, conducted by Tamir Sinai, (Centre for applied Policy Research and Munich European Forum), the students will discuss NATO operations and here especially the consolidation and stepping up to the next phase of ISAF in Afghanistan, i.e. the extension of ISAF to cover the whole of Afghanistan, including the East. The narcotics issue and fair burden-sharing amongst the partners concerning service in high-risk areas will also be discussed.

Experts from NATO will further brief the participants on these issues.

Further points discussion include challenges to NATO transformation and the use of the NATO Response Force (NRF) in operations.

Here the students will try and answer what military capabilities the Alliance will need in the coming years, touching on everything from conceptual questions of what future missions are likely to be conducted, to how identified shortcomings can be rectified in a way that is again in the spirit of fair burden-sharing. The NRF as one catalyst of this process of transformation will be central to this discussion. Questions of longer-term commitments to the rotation cycles of the NRF, operational costs but also the question of a generic NATO Special Operations Force will come up.

To round up the conference the results of the simulation will be presented to and discussed with NATO Secretary General Jaap de Hoop Scheffer and the Slovenian Minister of Defence Mr. Erjavec.

The event is a cooperation with the NATO Public Diplomacy Division (www.nato.int), the Munich European Forum (www.europeanforum.de), and IAPSS (www.iapss.org).