Leadership in the Big Bangs of European Integration 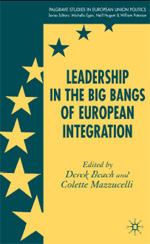 On Friday, 7 July 2006, Almut Metz, Center for Applied Policy Research, Chris Bobinski, Polish Institute for International Affairs, and Colette Mazzucelli, Molloy College & New York University, attended the Warsaw East European Conference to discuss the findings of the edited volume, Leadership in the Big Bangs of European Integration (Palgrave 2006). The authors' contributions dealt with the subsequent Dutch presidencies during the Maastricht and Amsterdam treaty negotiations, the Polish case in the constitutional process, and the role of the French-German tandem during the Nice IGC and the constitutional process.

The moderator of the panel was Prof. Lena Kolarska-Bobinska, President of the Foundation Institute of Public Affairs / Fundacja Instytut Spraw Publicznych, and author of over 150 publications. Jan Truszczynski, former undersecretary of state in the President's Office and the Ministry of Foreign Affairs, who represented the Polish government during the European Union membership negotiations, commented on the presentations.

The conference was part of a number of European events in the Polish capital. The night before former French President Valery Giscard d'Estaing had presented his view on the European Constitutional Treaty, followed by the opening reception of the Finnish presidency in the Council of the European Union.

The volume Leadership in the big bangs of European integration, edited by Derek Beach and Colette Mazzucelli, will soon be available at Palgrave.