European Union Enlargement - Can it be a win-win Situation? 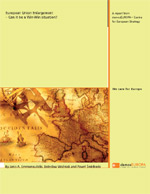 The accession of Bulgaria and Romania to the European Union (EU) on January 1, 2007, completes the fifth wave of EU enlargement initiated in May 2004. The next countries waiting in line are Croatia, Turkey (both engaged in EU accession talks since October 2005) and the Former Yugoslav Republic of Macedonia  all three have been attributed the official status of a candidate country. A second category of "potential candidates" includes Albania, Bosnia and Herzegovina, Montenegro, Serbia, and Kosovo (once the conundrum of its future status has been resolved). The EU has repeatedly given these countries of the Western Balkans a clear membership perspective. Another group consists of those countries covered by the European Neighbourhood Policy, which unilaterally declare their EU aspirations and due to their geography, culture and history have a justified reason to do so  Ukraine, Moldova and Georgia. The final group, which should be taken into the equation, includes Belarus and the two remaining Caucasus countries, Armenia and Azerbaijan. The EFTA members  Iceland, Lichtenstein, Norway and Switzerland  could easily be thought of as potential EU members.

On November 8, 2006, the European Commission released the so-called "enlargement package" consisting of the EU Enlargement Strategy, an annexed report on the Union's integration capacity and a series of individual national Progress Reports. The EU Enlargement Strategy is characterized by a reluctance to undertake any new commitments coupled with a simultaneous appeal to deliver the promises that have been made so far. The European Council will hold a debate on enlargement at its meeting on December 15-16, 2006. There are increasing doubts concerning the future of the enlargement process. Why is this so? There may well be as many answers as politicians and analysts dealing with the subject, but at least five factors are universally perceived as relevant.

1. Adverse political and economic cycle in the EU

The political climate in the European Union and in its member states is characterised by limited optimism about future developments. Whatever the hierarchy of reasons behind the rejection of the Constitutional Treaty in the Netherlands and France, there was undoubtedly an ingredient of reluctance towards further EU enlargement. Moreover, the performance of the core eurozone economies has been rather weak and the vision of soaring 5 unemployment rates and the "relocation" of workplaces to Eastern Europe has added fuel to these fears. Another important aspect has to do with a lack of leadership in Europe, which would be strong enough to communicate the benefits of enlargement to the public opinion. It remains to be seen what next year's change in power in two key EU member states, the United Kingdom and France will bring in this respect.

2. Fear of "overstretching" the Union

The question of "deepening vs. enlarging" is a constant feature of European debates. There are forces inside the Union, which favour a more federalist approach and are thus reluctant to further enlargement, and there are those which support a vision of an EU open to all European countries meeting the defined conditions irrespective of the Unions actual ability to absorb new members. The Commissions definition of the EUs "integration capacity" lists three aspects, which need to be taken into account if the enlarging Union wants to maintain its integration momentum: institutions, budget and community policies. Over the last decades the accession of new members and the continuation of political integration have by and large gone hand in hand. Some now fear that new rounds of enlargement will in effect prevent a further deepening of the integration process.

After the failure to ratify the Constitutional Treaty, decision-makers in the EU member states are more than ever cautious to pursue European policies which lack a clear public mandate. The picture concerning EU enlargement is mixed. According to the Eurobarometer poll from July 20062, public opinion is rather divided on how to proceed with the enlargement process. While in the new member states and in the acceding countries the answer would be a strong "yes", among the old EU-15 only in Spain, Greece and Denmark most of the citizens support an accession of new member states beyond an EU-25. And over 60 per cent of Germans, French and Austrians are even fundamentally opposed to further EU enlargement.

68 percent of European citizens feel that they are not well informed about EU enlargement.3 The European Commission holds that the need to address this shortcoming should be a priority, although the burden of providing clear, factual information rests also on other EU institutions, notably the European Parliament, and on the member states. It appears that the general political idea behind enlargement is understood and accepted by the public. What is missing, however, is information concerning the economic and social benefi ts of the process. By and large, enlargement is widely perceived as being unilaterally benefi cial for the new entrants on the expense of the old EU member states.

The potential accession of Turkey to the EU merits to be treated separately. Unlike in the case of other countries aspiring to join the EU  with the notable exception of Ukraine  Turkey would probably profoundly transform the very foundations of the Union. Because of its size, culture, religion, low GDP per capita and geostrategic location, the Turkish case can hardly be compared with any other EU candidate country. There are strong and vociferous opponents of Turkish membership in certain member states and European political circles. On the other side there are those who perceive Turkey's accession to the EU as a strategic opportunity for both sides. The interpretation and evaluation of the Turkish case is of course subjective, as is the assessment of the overall balance of possible advantages and disadvantages. However, one should always take into consideration the fact, that both Turkey and the EU will be very different in political, economic and demographic terms in 8-10 years' time, when the decision on Turkey's status vis-à-vis the EU will be most likely taken  provided that the EU accession talks continue and that they are concluded successfully. Against this background, we put forward eight recommendations, which aim to ensure the success of future rounds of EU enlargement as a process that benefits both the current and future members of the European Union.