Dr. Reinhardt Rummel, Almut Metz (both scholars at C·A·P) as well as Dora Martins (Technical University of Lisbon) are conducting research in China for several weeks. Their visit takes place in context of the research project The Impact of EU Enlargement on European Integration and the Global Political Economy which the Center for Applied Policy Research jointly conducts with the Centre for European Studies at Renmin University. The project is supported by the European Commission in the framework of the EU-China European Studies Centres Programme. 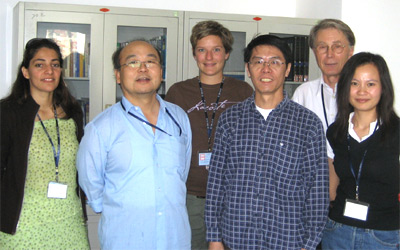 Reinhardt Rummel focuses on the Chinese perceptions of EU crisis management: The EU has started to engage in crisis management and peace support operations in several critical regions of the world such as the Western Balkans, Central Africa, the Middle East, the Caucasus and Southeast Asia. Though these interventions have been peaceful and small in size their impact is noticeable for other international actors including China. During his stay, Dr. Rummel is analyzing the predominant view in Chinas official, business and academic circles regarding the EU as a growing crisis manager.

Almut Metz, on the other hand, discusses with her Chinese colleagues at the Centre for European Studies at Renmin University (CESRUC) the future of the EUs Constitutional Treaty as well as different perspectives of institutional reform. How should a coherent, differentiated, and effective set of instruments for future institutional reforms look like? Thereby, Almut Metz is especially interested in the development of new instruments of governance beyond the community method. During her visit at CESRUC, she analyzes the potential of the so called Open Methods of Co-Ordination that are applied in the framework of the Lisbon Strategy and intends to develop a set of criteria that will help to identify promising fields of application.

Dora Martins finally concentrates on EU-China relations and their influence on society change in China. According to Chinas conception of the world as multipolar, the EU plays a significant role in counter weighting the US. The EU is Chinas trading partner number one, the 4th largest source of foreign direct investment and the largest source of cumulative technology transfer. Furthermore, there is a growing informal influence on Chinese politics and society through European individuals and NGOs working in China. Dora Martins is conducting high-ranking interviews during her actual stay in China in order to analyze formal and informal EU influences on Chinese politics and society changes.